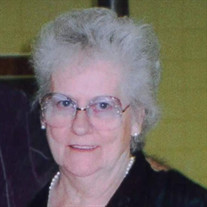 Addamae Erma Yarbrough, 85, of Urbana, Iowa, passed away on Sunday, October 25, 2020, at the St. Luke’s Hospice Unit in Cedar Rapids, Iowa, after a short illness. Per Adda’s request, she will be cremated and there will be no services. Her arrangements will be handled by Murdoch Funeral Home & Cremation Service in Center Point, Iowa. A Celebration of Life will be held next summer with her family. Her wishes were to have her ashes spread over the farm she loved, with her family in attendance. Adda was born on March 12, 1935, to George and Leona (Boyles) Rick. On February 23, 1952, she married Carl Rambo of Vinton, Iowa. They later divorced. On August 24, 1957, she married Ernest Yarbrough, Sr.; they were married for 63 years. They made a life for their family on a small farm outside of Toddville, Iowa. In their younger years, they enjoyed square dancing at the Toddville American Legion. Adda worked at Wilsons-Farmstead for 35 years. She then did in-home health care until she was 80 years old. Adda was a member of the Urbana Methodist Church and the Toddville American Legion Auxiliary. She enjoyed secondhand store shopping, and collecting Betty Boop memorabilia. Her greatest joys in life were her grandchildren, great-grandchildren, and her puppies. She is survived by her husband, Ernest Yarbrough, Sr.; children, Richard (Jeanne) Rambo of La Porte City, Iowa, Ernest (Connie) Yarbrough, Jr., of Bennett, Iowa, Ellen (John) Murphy of Keystone, Iowa, and Sharon Yarbrough. Adda forever will be loved and cherished by her 12 grandchildren; 24 great-grandchildren; and two great-great-grandchildren, with a third on the way. She is also survived by her sister, Viola Narveson; brothers, Howard (Marlene), Kenneth (Linda) and George (Dianne) Rick; sisters-in-law, Lois Ryan, Annie Allen; and brother-in-law, Vernie (Audrey) Yarbrough. She was preceded in death by her parents; sister-in-law, Marcia Rick; brothers-in-law, Charles Yarbrough, Jim Ryan, and Ned Allen; nieces, Shelly Rick and Trudy Narveson; and nephews, Jeff Rick and Steve Clair. The family would like to extend a special thank you to St. Luke’s Hospice, Dr. Lancaster and his staff, and Rockridge Care Center for their loving care of Adda.

Addamae Erma Yarbrough, 85, of Urbana, Iowa, passed away on Sunday, October 25, 2020, at the St. Luke&#8217;s Hospice Unit in Cedar Rapids, Iowa, after a short illness. Per Adda&#8217;s request, she will be cremated and there will be no services.... View Obituary & Service Information

The family of Addamae Erma Yarbrough created this Life Tributes page to make it easy to share your memories.

Addamae Erma Yarbrough, 85, of Urbana, Iowa, passed away on Sunday,...

Send flowers to the Yarbrough family.