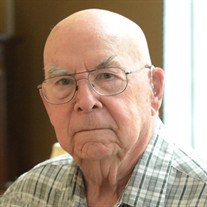 Albert “Al” Leroy Etzel, 95, of Marion, Iowa, died Sunday, June 27, 2021, of natural causes. Visitation will be from 4 to 6 p.m. Friday, July 2, 2021, at Murdoch Funeral Home & Cremation Service in Marion. A Memorial Graveside service will take place at 10 a.m. on Saturday, July 3, 2021, at Oak Shade Cemetery in Marion, officiated by Certified Celebrant, Casey Hepker. Military honors will be conducted by the United States Army and the Marion American Legion Post #298. Al was born to Harley and Elizabeth (Hess) Etzel in Marion, Iowa, on August 29, 1925. He grew up on the Etzel Dairy Farm near what is now Linn Mar High School, delivering milk to local residents. Al served in the Army in the Pacific theater during World War II. He was in the Philippines, and took part in the U.S. occupation of Japan. Later in life, Al was able to join a veterans Honor Flight to Washington D.C., an experience he treasured. In 2019, Al was honored as one of four Freedom Festival Heroes. He married Joan Miller on January 20, 1951. Al and Joan celebrated 60 years of marriage before her passing in 2011. Al retired from farming in 1963, when he returned to Marion and worked for the city’s public service and engineering departments. He was an active member of American Legion Post #298 in Marion for 67 years, holding almost every office there, including Post Commander. Al enjoyed restoring cars and tractors, including Model A Fords. He was a gifted woodworker who created clocks, tables and more for family and friends. Al is survived by four sons, Mike (Diane), Jerry (Terri), Curt (Kathy) and Steve (Lynette); two daughters, Linda (Larry) Sills and Cathy; 11 grandchildren; and 13 great-grandchildren. The family would like to thank the staff and the many friends he made at Summit Pointe.

The family of Albert "Al" Leroy Etzel created this Life Tributes page to make it easy to share your memories.

Send flowers to the Etzel family.