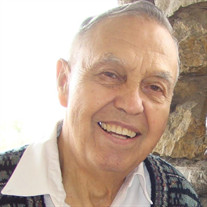 Albert Joseph Soukup, 91, of Marion, Iowa, passed away from complications due to congestive heart failure on Saturday, April 2, 2022, at the Dennis & Donna Oldorf Hospice House of Mercy in Hiawatha, Iowa. A Rosary will begin at 4:30 p.m. with a visitation to follow until 7:00 p.m. on Friday, April 8, 2022, at Murdoch Funeral Home & Cremation Service in Marion. A Funeral Mass will be held at 10:00 a.m. on Saturday, April 9, 2022, at St. Joseph Catholic Church in Marion, with Reverend David O’Connor officiating. Per Albert’s wishes, cremation will follow services. Inurnment with Military Honors will take place at 10:00 a.m. on Monday, April 11, 2022, at St. John’s Cemetery in Cedar Rapids, Iowa. Albert was born on April 7, 1930, in Cedar Rapids, Iowa, the son of Albert John and Lucy (Kuhn) Soukup. He was a 1948 graduate of St. Wenceslaus High School in Cedar Rapids and went on to serve honorably in the United States Army. On November 26, 1955, Albert was united in marriage to Pauline Elizabeth Hahn in Cedar Rapids. For many years he worked as an electrician, retiring in 1994. Albert was a member of St. Joseph Catholic Church since 1968. He was also a member of the Marion American Legion Post #298, I.B.E.W. 405 Electrical Union, and an Old Farts Electric Charter Member. Albert was a devout catholic and had a strong devotion for the rosary and our blessed Virgin Mary. He insisted on praying the rosary every chance he could, especially when Albert was traveling in the car with his family. Albert enjoyed hunting, fishing, gardening, and wine making. He especially loved and enjoyed spending time with his family and will be greatly missed by all who knew and loved him. Albert is survived and lovingly remembered by his wife of 66 years, Pauline Soukup of Marion; two sons, Mark (Beth) Soukup of Overland Park, Kansas, and John (Suzi) Soukup of Phoenix, Arizona; one daughter, Kathleen (Doug) White of Lisbon, Iowa; seven grandchildren, Kyle Slaymaker, Chad Slaymaker, Kelsey Soukup, Taylor Soukup, Courtney Soukup, Shea Soukup, and Ciela Soukup; and three sisters-in-law, Rosemary Soukup of Papillion, Nebraska, Mary Soukup of White Rock, New Mexico, and Patricia Soukup of Green Valley, Arizona. He was preceded in death by his parents, Albert and Lucy Soukup; two sons, Alan and Matthew Soukup; one sister, Mary Ann Pisarik; three brothers, Paul, Joseph, and David Soukup; one brother-in-law, Paul Pisarik; and one grandson, Jordan Slaymaker. Memorials in Albert’s memory may be directed to either St. Joseph Catholic Church in Marion or to the family to be designated at a later date.

Albert Joseph Soukup, 91, of Marion, Iowa, passed away from complications due to congestive heart failure on Saturday, April 2, 2022, at the Dennis & Donna Oldorf Hospice House of Mercy in Hiawatha, Iowa. A Rosary will begin at 4:30 p.m. with... View Obituary & Service Information

The family of Albert Joseph Soukup created this Life Tributes page to make it easy to share your memories.

Albert Joseph Soukup, 91, of Marion, Iowa, passed away from complications...

Send flowers to the Soukup family.