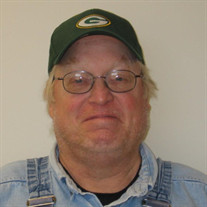 Allan Stanley “Big Al” Hale, 72, of Ely, Iowa, died Sunday, October 18, 2020, after a brief illness. A visitation will be held from 5 – 8 p.m. on Thursday, October 22, 2020, at The Legacy Center at Murdoch-Linwood in Cedar Rapids. A funeral service with military honors will be held at 10:30 a.m. on Friday, October 23, 2020, at The Legacy Center at Murdoch-Linwood. Burial will follow at Wayne Zion Lutheran Cemetery in rural Monticello, Iowa. All guests are respectfully requested to wear a mask and practice social distancing. Guests are encouraged to wear casual dress; Al will be wearing his overalls. A livestream of the funeral service may be accessed on the funeral home website tribute page for Al, under “photos and videos or media,” starting at 10:30 a.m. on Friday, October 23. Al was born on March 26, 1948, in Maquoketa, Iowa, the son of Stanley and Lina (Siegel) Hale. He graduated from Midland High School in Wyoming, Iowa. Al served in the United States Army from 1969-1971 during the Vietnam War. He was united in marriage to Kay Frances Lange on September 2, 1972, in Anamosa, Iowa. Al worked for Square D, and then at ADM for over 30 years, retiring as a foreman. He then worked as a school bus aide for the College Community School District. Al was a member of the Ely American Legion. He enjoyed Allis Chalmers tractors and classic cars. Al was an outdoorsman who loved fishing, watching and feeding birds, and gardening. He was known for always tinkering around and being a prankster. Al was a fan of the Green Bay Packers. Above all, he was a devoted husband, father, and grandfather. Survivors include his wife, Kay Hale of Ely; children, Jennifer (John) Buresh of Ely, Kristen Hale, and Amanda (Nic) Chase, all of Cedar Rapids; grandchildren, Dillon (Haley) Brunscheen, Drake Brunscheen, Bryce Buresh, Braden Buresh, Keelen Hale (Heaven Mcintosh), and Colin Hale (Hunter Hahn); great-grandchildren, Dawson, Savior, and Lillyana; one great-granddaughter, Harper, due in December; sister, Karen Alday of Cedar Rapids; brother-in-law, Paul (Sue) Lange of Lisbon, Iowa; as well as four nieces and one nephew. He was preceded in death by his parents, Stanley and Lina Hale; brother-in-law, Bill Alday; mother and father-in-law, Paul (Kate) Lange, Sr.; dogs, Tausha and Roxie; and several grandpups. Memorials may be directed to the family. The family would like to extend a special thank you to the University of Iowa Hospital and VA Hospital for the excellent care they gave Al through the years, especially nurses Justin and Carly for their love and support in Al’s final days.

The family of Allan 'Big Al' Stanley Hale created this Life Tributes page to make it easy to share your memories.

Send flowers to the Hale family.