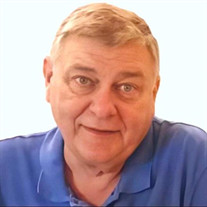 Alvin Vincent “Al” Miller, passed away unexpectedly on April 6, 2021. Iowa services for Al were held Sunday, April 11, 2021, at Murdoch-Linwood Funeral Home & Cremation Service, Cedar Rapids, and may be viewed under "photos and videos or media," on his obituary page at www.mudochfuneralhome.com. Indiana services will be held May 1, 2021, at the Oxford Federated Church, Oxford, Indiana. Visitation will be from 2 – 3:30 p.m. with the Celebration of Life Service to immediately follow at 3:30 p.m. at the church. All guests are respectfully requested to wear a mask and practice social distancing. Al was born on June 23, 1955, in Lafayette, Indiana, to Ramon and Lois Miller. He grew up in Oxford, Indiana and graduated from Benton Central High School. After graduation, Al married his high school sweetheart, Marcia James Miller in 1973, and enjoyed 48 years together raising three children and five grandchildren. Al’s first ‘job’ was to serve his country in the United States Air Force in Communications as an Electronics Technician with top secret clearance, stationed in London, England. He then continued his education attending the School of Engineering at Purdue University and received a Bachelor of Science in Electrical Engineering. Alvin raised his family in Galesburg, Illinois. He spent the majority of his career working on electronic monitoring systems on refrigerators employed by Admiral which eventually became Whirlpool. Al finished his career as the Manager of Advance Design Engineer. Al and Marcia moved to Swisher, Iowa in 2001. After semi-retiring, Al worked part-time for Classic Tax & Accounting, retiring in 2020. Al also worked at the Voting polls and acted as the Precinct Election Official Chairperson the last few years. Al was an avid Purdue fan, reader, enjoyed cooking and traveling and was most happy when spending time with his family on the lake boating. He was so proud of his children, Jennifer Hughs (Chad), Kristina Miller, Douglas Miller (Abby) and his grandchildren Cora Hughs, Jacob Hughs, Nathaniel Foster, Nikolas Foster, and Hannah Johnson. Al is survived by his parents, Ramon and Lois Miller; wife, Marcia Miller; siblings, David Miller (Cindy) Sun Lakes, Arizona, Ramona Lawson (Wynn) West Lafayette, Indiana, and Angela Dimmich West Lafayette, Indiana; and many nieces and nephews. He was treasured and loved by his family and will be missed dearly. A Memorial Service will also be held in Indiana at a later date. Contributions in his name to be made to Marcia Miller and will be forwarded to The Purdue Foundation for Life.

The family of Alvin Vincent "Al" Miller created this Life Tributes page to make it easy to share your memories.