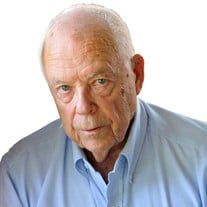 Arlo Burdette Ginther, 97, of Hiawatha, Iowa, passed away on Saturday, May 7, 2022, at his home in Hiawatha. Visitation will take place from 5:00 to 8:00 p.m. on Friday, May 20, 2022, at Murdoch Funeral Home in Marion, Iowa. A Funeral Mass will be held at 10:00 a.m. on Saturday, May 21, 2022, at St. Joseph Catholic Church in Marion. Burial will follow at Oak Shade Cemetery in Marion. Arlo was born on October 29, 1924, in Newton, Iowa, the son of Frank and Bertha (Hamilton) Ginther. He served honorably in the United States Navy during World War II. Arlo was the owner of Ginther’s Furniture & Appliance in Marion. He was united in marriage to Berniece Mae Becker on March 6, 1949. She preceded him in death on January 10, 1993. Arlo later married Myrna Conderman in November 1997. He enjoyed cooking, listening to music, and attending dances. Arlo especially loved woodworking. Arlo is survived and lovingly remembered by his three sons, Ronald (Rhonda) Ginther of Marion, Kenneth (Kim) Ginther of Palos Hills, Illinois, and Steve (Elizabeth) Ginther of Jefferson City, Missouri; three daughters, Linda (Lynn) Starry of Excelsior Springs, Missouri, Cindy (Kerry) DeYarman of Cedar Rapids, and JoAnn (Lonnie) Knapp of Cedar Rapids; two step-sons, Joel Conderman of Waukon and Greg Conderman of DeKalb, Illinois; as well as numerous grandchildren, great-grandchildren and great-great-grandchildren. He was preceded in death by his parents, Frank and Bertha Ginther; spouses, Berniece Ginther and Myrna Ginther; son, Michael Ginther; daughter, Nancy Mackerman; and all six of his siblings. Memorials in Arlo’s memory may be directed to St. Joseph Catholic Church in Marion.

The family of Arlo Burdette Ginther created this Life Tributes page to make it easy to share your memories.

Arlo Burdette Ginther, 97, of Hiawatha, Iowa, passed away on...