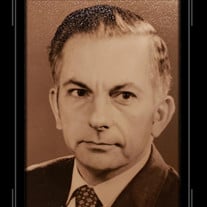 Arlo William Meyer, 95, formerly of Cedar Rapids, passed away on Saturday, October 16, 2021, at his residence at Keystone Place at Forevergreen in North Liberty, Iowa. In agreement with his wishes, cremation has taken place. A private family graveside service with military honors will be held at a later date at Shueyville Cemetery, in Shueyville, Iowa. Arlo was born the son of Marvin and Esther (Buchmann) Meyer on July 7, 1926, in Blue Earth, Minnesota. He was a graduate of Mankato High School, in Mankato, Minnesota, and later attended Coe College in Cedar Rapids. Arlo was a navy veteran and served during World War II, from 1944 until he was honorably discharged in 1946. He was united in marriage to Lorene Clair Gillette on January 3, 1948, at Mankato. They made their home in Cedar Rapids, and to this union, one daughter, Margaret “Peg” was born. He was employed as a Mechanical engineer with the former Collins Radio Co., retiring after 35 years as a Program Manager. In the 1950s, Arlo did Amateur Radio (a.k.a. Ham Radio, W0LBK). He ran phone patches so the men serving in the military could speak to their spouses free of charge and was very active with the Cedar Rapids Civil Defense. All of his life, Arlo loved to fly. He held a private pilot’s license and had belonged to the Cedar Rapids Flying Club at the former Hunter Airport. Arlo was also a big car enthusiast and often raced his Triumph TR4 race cars. In the mid-1960s, he was “The Midwest Central Division Champion” for three consecutive years. After Arlo gave up racing, he became a Chief Steward for the Sports Car Club of America (SCCA) for many years. Eventually, Arlo and Lorene bought a motor home and became members of the Good SAM Motor Coach Association, traveling all over and they visited the lower 48 United States of America. When the Eastern Iowa Honor Flight was initiated, Arlo was very influential serving on the Advisory Board for several years. He was fortunate enough to go on one of flights. Arlo thoroughly enjoyed the experience of a lifetime and was accompanied by his daughter, Peg. One of the Honor Flights was indeed named “The Arlo Meyer Honor Flight” after him. Arlo was active is entire life until his age caught up to him. He will be greatly missed by all who knew and loved him. He is survived and lovingly remembered by his wife of 73 years, Lorene Meyer of North Liberty; daughter, Peg (Jim) Toms of Shueyville; grandchildren, Beth (Vince) Vanderah of Ankeny and Mike (Ann) Speers of Burlington; and several great-grandchildren.

Arlo William Meyer, 95, formerly of Cedar Rapids, passed away on Saturday, October 16, 2021, at his residence at Keystone Place at Forevergreen in North Liberty, Iowa. In agreement with his wishes, cremation has taken place. A private family... View Obituary & Service Information

The family of Arlo William Meyer created this Life Tributes page to make it easy to share your memories.

Send flowers to the Meyer family.