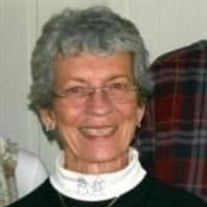 Barbara J. Kydd, 84, of Marion, Iowa, passed away on Wednesday, October 20, 2021, at The Views of Marion. A Visitation will be held from 4 to 6 p.m. on Thursday, October 28, 2021, at Murdoch Funeral Home & Cremation Service of Marion. Graveside services will be held at 1 p.m. on Friday, October 29, 2021, at Our Silent City Cemetery in Kellogg, Iowa Barbara was born on July 20, 1937, in Davis City, Iowa, the daughter of Russell and Winifred (Shoemaker) Hagen. She was a 1955 graduate of Kellogg High School in Kellogg, Iowa. On August 20, 1960, Barbara was united in marriage to George E. Kydd in Kellogg, Iowa. Barbara worked at Maytag and Rockwell Collins before starting her own cleaning company, “Barb’s Cleaning Service”. She spent her time golfing, bowling and tending her flower garden, unless she was spending time with her children, grandchildren, and dog Billy. Barbara will be remembered for being spunky, sassy and funny by all who knew and loved her. Barbara is survived and lovingly remembered by her sons, David Kydd (Mindy Erlinger) and Thomas (Danelle) Kydd both of Marion; grandchildren Bailey Kydd of Portland, Oregon, SRA Austin Kydd (USAF) stationed in Klamath Falls, Oregon, Meagan Kydd (Camden Griffith) of Cedar Rapids, Tyler Kydd (Kristin Airheart) of Rockwall, Texas, Nick Carney (Lydia Rogers) of Cedar Rapids, Emily Carney (Jake Harriott) of Cedar Rapids, Alison Carney of Marion, and Nate Carney (Mikala Ealy) of Cedar Rapids; great-grandson, Kyle Kydd of Rockwall, Texas; sisters, Sue Lenz of Kellogg, Patty (Randy) Jackson of Newton, and Robert Hagen (Nina Sauer) of Kellogg; and many nieces and nephews. She was preceded in death by her parents, Russell and Winifred Hagen; husband, George Kydd; and brother-in-law, Dwight Lenz. In lieu of flowers memorials in Barbara’s name may be made to The Alzheimer Association at www.alz.org. The family would like to thank the staff of The Views of Marion for the loving care Barbara received.

Barbara J. Kydd, 84, of Marion, Iowa, passed away on Wednesday, October 20, 2021, at The Views of Marion. A Visitation will be held from 4 to 6 p.m. on Thursday, October 28, 2021, at Murdoch Funeral Home & Cremation Service of Marion. Graveside... View Obituary & Service Information

The family of Barbara Kydd created this Life Tributes page to make it easy to share your memories.

Send flowers to the Kydd family.