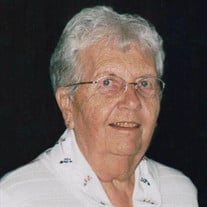 Bessie D. Bible, 92, of Springville, Iowa, passed away on Saturday, April 2, 2022, at Lisbon Rehabilitation Center, in Lisbon, Iowa. Funeral service will be held at 11 a.m. on Friday, April 8, 2022, at Murdoch Funeral Home & Cremation Service in Marion, Iowa, with Pastor Joel Bible from Gospel Light Baptist Church in Marion and Pastor Jason Felt from Lighthouse Baptist Church in Theodore, Alabama officiating. Visitation will be an hour prior to the service, with burial to follow at Springville Cemetery. Bessie was born on March 28, 1930, in Ely, Iowa, the daughter of August and Rose (Franta) Spacek. She was a 1948 graduate of Harrisburg High School in Harrisburg, Oregon and went on to graduate from Sacred Heart General Hospital School of Nursing in Eugene, Oregon, in 1951. On December 21, 1951, Bessie was united in marriage to Robert “Bob” L. Bible, in Springfield, Oregon. She worked as a nurse for five years at Long Beach General Hospital in Long Beach, California. Before moving back to Iowa in 1956, where she worked for five years at Mercy Medical Center in Cedar Rapids. Bessie was a stay-at-home mom who helped on the farm, raising sheep for many years. She spent her time painting with the Springville Palette Pals, raising a large garden and enjoyed canning. Bessie served on Cedar Rapids Aglow for two terms and was a member of Valley View Baptist Church. She will be greatly missed by all who knew and loved her. Bessie is survived and lovingly remembered by her husband of 70 years, Bob Bible of Springville; daughter, Lynetta L. (Gerard G.) Hamm of Cedar Rapids; sons, James “Jim” P. (April) Bible and Larry (Robin) Bible both of Central City, Iowa; 11 grandchildren; 20 great-grandchildren; and four great-great-grandchildren. She was preceded in death by her parents, August and Rose; and two sisters, Lorean McShane, and Wilma Verger. In lieu of flowers, memorials in Bessie’s memory may be directed to the family.

The family of Bessie Doris Bible created this Life Tributes page to make it easy to share your memories.

Bessie D. Bible, 92, of Springville, Iowa, passed away on Saturday,...

Send flowers to the Bible family.