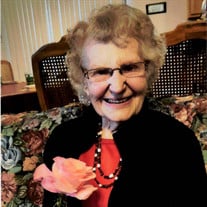 Betty Ann Bilisoly, 89, of Walford, Iowa, died Saturday, September 25, 2021, at her home. On Sunday, October 3, 2021, there will be a visitation from 2 - 6 p.m. at the Legacy Center at Murdoch-Linwood, 520 Wilson Avenue SW, Cedar Rapids Iowa 52404. A full funeral service and burial will be held in Denver, Colorado on October 9 at the Fairmount Funeral Home, 430 S. Quebec Street, Denver, Colorado 80247. At the Fairmount Funeral Home there will a visitation from 12:30 - 1:30 p.m. The funeral service will follow at 1:30 p.m. Burial will take place at 2:30 p.m. immediately after the funeral service at Fairmount Cemetery in Denver, Colorado. The funeral service in Denver will be livestreamed. Please go to the Fairmount Funeral Home website for the link in Betty Bilisoly's obituary. Betty was born in Des Moines, to the family of Harry and Doris (Wilkins) Reeves, along with her two brothers, Cliff and Ron. They were privileged to be raised in a Christian family. Betty graduated from East High School in Des Moines. She worked for the Des Moines School Board from 1949 – 1953. At an early age, she realized she was a sinner and accepted the Lord Jesus as her personal Savior. When she was 22 years old, she married Don Bilisoly from Denver, Colorado where they lived for 16 years and were blessed with four children: Shirley, John, Becky, and Tom. Don was alerted of an open door for the Gospel in Newfoundland, Canada in the 1960’s. After making a couple trips there as a family, they moved to Corner Brook, Newfoundland on July 1, 1970. Totally unknown to them, the Lord was also preparing the hearts of Cecil and Marjorie Roossinck to move to Newfoundland after their marriage in August the same summer. This proved to be a great encouragement to both families for fellowship in the “new” land. The Lord gave Don a verse as a “springboard” to make this move. Zechariah 10:9 “And I will sow them among the people: and they shall remember me in far countries; and they shall live with their children and turn again.” Though Don did do Gospel work, his main thrust was toward Christ as the only true gathering center. He and Betty also had a summer cottage for young people in the Corner Brook area. This move was a life-changing event for each of the children in varying degrees. After high school, one-by-one the children went back to the USA for employment, except Becky, who remained until she married Dave VanHolstyn in Grand Rapids, Michigan. Within a few years, John married Carmen Klassen of Washington state, Shirley married Dave Thurston of Iowa, and Tom married Karry Labenne of California. During their years of living in Newfoundland, Don and Betty traveled throughout the United States and Canada visiting assemblies of believers to encourage and strengthen them. They also had the privilege of visiting believers in other countries, including Egypt, Australia, England, and the West Indies. Don went to be with his Lord in May of 2002. Betty stayed in Newfoundland until 2015, when she moved back to the USA to Walford, Iowa to be near her daughter, Shirley, and son-in-law, Dave. Betty loved and valued these verses in Romans 8:37, 38-39 “…in all these things we are more than conquerors through Him that loved us. For I am persuaded, that neither death, nor life, nor angels, nor principalities, nor powers, nor things present, nor things to come, nor height, nor depth, nor any other creature, shall be able to separate us from the love of God which is in Christ Jesus our Lord.” Survivors include her children, Shirley (Dave) Thurston of Walford, John (Carmen) Bilisoly of Arvada, Colorado, Becky (Dave) VanHolstyn of Grand Rapids, Michigan, and Tom (Karry) Bilisoly of Hawaii; 14 grandchildren; and 13 great-grandchildren She was preceded in death by her parents, Harry and Doris Reeves; husband, Don Bilisoly; grandson, Mike VanHolstyn; granddaughter, Anna Lisa Bilisoly; and brothers, Cliff and Ron Reeves. Memorials may be directed to Bible Truth Publishers, P.O. Box 649, Addison, Illinois 60101, or to the family.

The family of Betty Ann Bilisoly created this Life Tributes page to make it easy to share your memories.

Send flowers to the Bilisoly family.