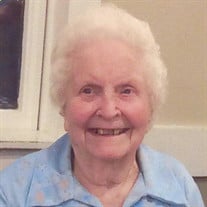 Betty Jean Liegl, 96, of Anamosa, Iowa, passed away on Friday, May 6, 2022, at the Anamosa Care Center. Visitation will be held from 4 to 7 p.m. on Monday, May 9, 2022, at Murdoch Funeral Home & Cremation Service in Central City, Iowa. Funeral service will be held at 10:30 a.m. on Tuesday, May 10, 2022, at the funeral home, with Father Wayne Dressler officiating. Burial will follow at Mt. Clark Cemetery. Betty was born on December 12, 1925, near Beaman, Iowa, the daughter of Bert C. and Nellie M. (Arthur) Glass. She was a graduate of Beamon High School and went on to attend shorthand/typing courses and worked as a secretary for Lennox Company. On February 20, 1950, Betty was united in marriage to Albert A. Liegl, in Marion, Iowa. Betty worked alongside her husband as a farm wife. She was a member of the local homemaker’s club, Central City PTA, American Legion Auxiliary #421, and she also served as the secretary of the Veterans of 776th Tank Destroyers Battalion, organizing their reunions for many years. Betty was very proud of her husband’s military service. She was known as the egg lady for she raised chickens and sold eggs. Betty always kept a garden and was always willing to share her knowledge of how to be a farm wife. She will be greatly missed by all who knew and loved her. Betty is survived and lovingly remembered by her daughter, Pamela (Steve Sarrazin) Liegl of Streater, Illinois; son, Victor (Sandra) Liegl of Central City; daughter-in-law, Karen of Central City; grandson, Patrick (Heidi) Liegl; granddaughters, Sarah (Brian Hovden) Albarracin and Gina (Ian) Dye; and great-grandchildren, Aimee, Alaina, Wyatt, Noah, and Hazel. She was preceded in death by her parents; husband, Albert; son, Dennis Liegl; two brothers; and two sisters. Memorials in Betty’s memory may be directed to Camp Courageous, 12007 190th Street, Monticello, Iowa, 52310 or the Central City American Legion Auxiliary #421, 6 Central City Road, Central City, Iowa, 52214.

Betty Jean Liegl, 96, of Anamosa, Iowa, passed away on Friday, May 6, 2022, at the Anamosa Care Center. Visitation will be held from 4 to 7 p.m. on Monday, May 9, 2022, at Murdoch Funeral Home & Cremation Service in Central City, Iowa. Funeral... View Obituary & Service Information

The family of Betty Jean Liegl created this Life Tributes page to make it easy to share your memories.

Send flowers to the Liegl family.