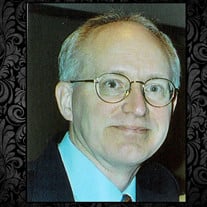 Blaine V. Houmes, M.D. Blaine Vincent Houmes, 68, of Cedar Rapids, died peacefully at his home on June 6, 2021, of amyloidosis, a blood cell malignancy. Private interment will occur at a late date. His survivors include his beloved wife, Nancy Pfutzenreuter; his two children, Sam (Cindy Weaver) of Anoka, Minnesota, and Katrina (Sean Atwell) of Minneapolis, Minnesota; and three sisters, Nancy Stage (Tim) of Dike, Iowa, Cleda Houmes of Salinas, California, and Allison Larson of Algona, Iowa. Blaine was born September 13, 1952, in Cedar Rapids, the son of Dr. Richard L. Houmes and Alice L. (Kubec) Houmes. A 1970 Graduate of Central City High School, he earned a bachelor’s degree in microbiology at Iowa State University in 1974. He continued with one year of graduate school at Ames, then began a career in a Cedar Rapids quality assurance lab and quickly found it boring. Eager for something completely different, he was hired as an EMT at the Cedar Rapids Area Ambulance Service. During this new role he simultaneously completed one of the first paramedic certifications in Iowa along with a second bachelor’s degree (in English) at the University of Iowa. He followed this by volunteering as a human guinea pig, locked up for a year in a federal department of agriculture nutrition laboratory in Grand Forks, North Dakota. After completing the program unscathed, he was somehow able to convince Nancy that marriage might be a worthwhile adventure. They promptly eloped and were married in Las Vegas, Nevada, on July 18, 1983, in a sleazy wedding chapel. Initially this posed a problem as they forgot to bring a witness to sign the marriage certificate. It was quickly resolved by going outside and bribing a wino wandering down the street. He was only too happy to oblige, and then made a quick exit. Blaine graduated from the University of North Dakota School of Medicine in 1988, and then completed internship and residency programs at Cook County Hospital in Chicago. He practiced emergency medicine at Mercy Hospital in Cedar Rapids for many years then briefly at Jones Regional Hospital in Anamosa until retirement. He was a member of the Iowa Medical Society, the American College of Emergency Physicians, the American Academy of Emergency Medicine, and the American Academy of Forensic Sciences. He served a term on the Iowa Board of Medicine and for ten years was a deputy medical examiner for Linn County. He researched, implemented and was director of Mercy’s Sexual Assault Nurse Examiner program, the first in Cedar Rapids. He also served on the Mercy Hospital Ethics Committee, although whenever friends learned of this they would invariably erupt in laughter. He considered medicine as an honorable profession, but his true avocation revolved around his family (travels, hobbies, art, music, laughter, and yearly mailings of bizarre Christmas letters) and Abraham Lincoln. He was an armchair Lincoln student, speaking at national conferences, and authored several medical and history journal articles, along with book reviews. Special thank you to Dr. Mary Nelson and staff, Dr. Deb Wilbur and all staff at Hall Perrine Cancer Center, Home Instead (especially Joanne and Erika) and Molly and Tim Trosky for their never-ending support. In lieu of flowers, preference of donations to Camp Courageous as suggested.

The family of Blaine Vincent Houmes created this Life Tributes page to make it easy to share your memories.

Send flowers to the Houmes family.