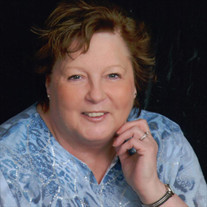 Bonnie Billhorn, 68, of Manchester, Iowa, passed away on Tuesday, October 20, 2020, at Regional Medical Center. Friends may call from 3 to 6 p.m., Tuesday, October 27, 2020 at Bohnenkamp-Murdoch Funeral and Cremation Service. Funeral services will be held at 10:30 a.m. on Wednesday, October 28, 2020 at the First Lutheran Church in Manchester with the Reverend Tony Ede officiating. Burial will be at the Oakland Cemetery, Manchester. All guests are respectfully encouraged to wear a mask and practice social distancing. Bonnie Jean Billhorn was born November 4, 1951 at Willard Hospital in Manchester to the proud parents of Kenny and Vonda Billhorn. She graduated from West Delaware High School in 1969. She went on to college at Patricia Steven’s in Milwaukee. While in Milwaukee she met Leo Delperdang. They married and they had one son, Scott. They later divorced and she married William Flanagan. Together, they had three children; Chad, Shaun and Brynne. She worked at Exide Manufacturing and was head of the Senior Daycare Center for many years as well as other places. After retiring, she enjoyed sewing, making many quilt tops for missions at church, crocheting many aphgans for Oldorf Hospice in Hiawatha. She liked going on trips with her mother and her sisters, Gloria and Kathy. Bonnie is survived by her mother, Vonda Billhorn of Manchester; sisters, Gloria Kluesner of Manchester, Kathy Peterson of Knoxville, TN; her sons, Scott (Cher) Delperdang of Manchester, Shaun (Nicole) Flanagan of Hopkinton; daughter, Brynne Flanagan (Ben) of Bond Colorado; three grandchildren, Kayla, Tristen and Riley Flanagan of Hopkinton, Iowa; as well as many nieces, nephews and friends. She is preceded in death by her father, Kenny Billhorn; son, Chad Delperdang; her uncle, Ray Nodurft and aunt, Vernita Pape. Please share a memory of Bonnie at www.murdochfuneralhome.com under obituaries.

The family of Bonnie Billhorn created this Life Tributes page to make it easy to share your memories.

Bonnie Billhorn, 68, of Manchester, Iowa, passed away on Tuesday,...

Send flowers to the Billhorn family.