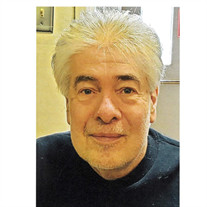 Bruce P. Byerly, 70, of Marion, Iowa, formerly of Dubuque, Iowa, passed away on Thursday, October 29, 2020, from complications of Covid-19. In agreement with his wishes, cremation has taken place. A celebration of Bruce’s life for family and friends is being planned for a later date. Bruce was born on March 24, 1950, in Anamosa, Iowa, the son of Willard and Esther (Byers) Byerly of Anamosa, Iowa. He was a 1968 graduate of Anamosa High School and later graduated from Hawkeye Technical Institute in Waterloo, Iowa. Bruce lived his dream career as a model designer working for all the major toy/model manufacturing companies, Mattel, Tomy, Monogram, Revell, and Ertl. He retired in 2016, from Lowe’s in Dubuque, Iowa. Bruce was married to Kathy Koecke of Dubuque in 2001, they later divorced. He loved building models and his cats. He will be greatly missed by all who knew and loved him. He is survived by his brother, Warren (Luann) Byerly of Marion; nieces and nephews, Kris Byerly of Dayton, Ohio, Mike (Jamie) Byerly of Dubuque, Kyle Himebaugh of O’Fallon, Missouri, and Brad Himebaugh of Omaha, Nebraska. He was preceded in death by his parents; and sister and brother-in-law, Pam and Bill Himebaugh. Memorials in Bruce’s memory may be directed to SAINT Cat Rescue & Adoption Center at 1200 16th Avenue SW in Cedar Rapids, Iowa, 52404.

Bruce P. Byerly, 70, of Marion, Iowa, formerly of Dubuque, Iowa, passed away on Thursday, October 29, 2020, from complications of Covid-19. In agreement with his wishes, cremation has taken place. A celebration of Bruce&#8217;s life for family... View Obituary & Service Information

The family of Bruce P. Byerly created this Life Tributes page to make it easy to share your memories.

Send flowers to the Byerly family.