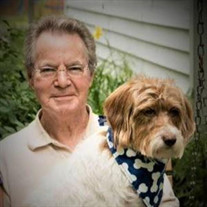 Bryan George Dietman, 83, of Cedar Rapids, Iowa, passed away on Friday, February 5, 2021, at the St. Luke’s Hospice Unit in Cedar Rapids. A private family memorial gathering will take place at a later date. Murdoch-Linwood Funeral Home & Cremation Service in Cedar Rapids is assisting the family. Bryan was born on December 10, 1937, in Eastleigh, England, the son of Jack and Violet (Mogg) Dietman. Bryan began working at the age of 16 as an apprentice in mechanical engineering for the Eastleigh Railway Works in England. Bryan, also known as “Bunny” by his family and friends in England, immigrated to the United States in 1967 with his first wife, Maggie, and two daughters. He was united in marriage to Eileen Baty on May 23, 1998. Bryan owned his own property repair business and also contracted at the Cedar River Paper Mill when it first opened. He was very handy and enjoyed the challenge of repairing things. His interests included traveling, gardening, playing cards, model trains, and spending time with his family and friends. Bryan was a strong person who overcame many obstacles in his life and always had a positive attitude. He leaves behind his beloved dogs, Sookie and Griffin. Survivors include his loving wife, Eileen Dietman; two daughters, Karen Tipton (Ted Riley) and Jayne Southall; two step-children, Darren (Kim) Baty and Devan (Hatem) Baty; six grandchildren; 11 great-grandchildren; sister, Carol (Len) Stamp; sister-in-law, Ann Dietman; and many nieces and nephews. He was preceded in death by his parents; first wife, Maggie; twin brother, John; and son-in-law, Rob Southall. The family would like to extend a special thank-you to St. Luke’s Hospice for their support and compassion. In lieu of flowers, memorial contributions in Bryan’s name may be sent to the Cedar Rapids Metro Parkinson’s Association, St. Luke’s Hospice or the Cedar Valley Humane Society.

The family of Bryan George Dietman created this Life Tributes page to make it easy to share your memories.

Send flowers to the Dietman family.