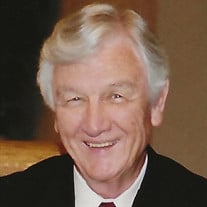 Bryan C. Hawkins, 89, of Cedar Rapids, Iowa, passed away on Sunday, May 22, 2022, at Cottage Grove Place in Cedar Rapids, after a lengthy battle with Parkinson’s disease. A Celebration of Life will take place at a later date. Bryan was born on September 4, 1932, in Tulsa, Oklahoma, the son of L. Clark and Mercedes (Bryan) Hawkins. He graduated from Will Rogers High School in Tulsa. Bryan served honorably in the United States Army from 1953 to 1955, and went on to attend Tulsa University, obtaining his Bachelor of Science in Physics in 1960. He was united in marriage to Nancy Wells in Tulsa in August of 1958. Bryan worked as a Senior Engineer for American Airlines and as Business Development Manager for Rockwell Collins, retiring in 1996. He was a member of the Oklahoma Airmen, EAA, AOPA and International AOPA. Bryan’s passion was aviation. He was a flight instructor, also holding instrument and commercial ratings. Volunteering for Angel Flight and exploring the country by air gave him great joy. He enjoyed restoring classic automobiles, including his beloved 1950 Silverstone Healey and 1951 MG TD. His passion for learning and curiosity about the world was an inspiration to all who knew him. Traveling extensively for work and pleasure, he visited five of the world’s seven continents, often with Nancy. Bryan is survived and lovingly remembered by his wife of 63 years, Nancy Hawkins of Cedar Rapids; three children, Darcy (Jeff Evans) Caraway of Marion, Bradley Hawkins of Austin, Texas, and Lindsey (Simon) Andrew of Iowa City, Iowa; and three grandchildren, Madison Bemus, Alyssa Bemus, and Solomon Andrew. He was preceded in death by his parents; and a brother, William Hawkins. In lieu of flowers, please consider a donation to the Michael J. Fox Foundation for Parkinson’s Research.

Bryan C. Hawkins, 89, of Cedar Rapids, Iowa, passed away on Sunday, May 22, 2022, at Cottage Grove Place in Cedar Rapids, after a lengthy battle with Parkinson&#8217;s disease. A Celebration of Life will take place at a later date. Bryan was... View Obituary & Service Information

The family of Bryan C Hawkins created this Life Tributes page to make it easy to share your memories.

Send flowers to the Hawkins family.