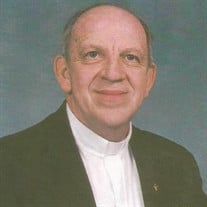 On November 2, 2021, Carl John Richardson, loving husband, father, and servant of God, passed away at the age of 85. Funeral Service: 11:00 a.m. Friday, November 5, 2021, at St. Paul’s Lutheran Church in Marion, Iowa, where the family will greet friends for one hour prior to the service on Friday. Burial will follow at St. Matthew Lutheran Cemetery in Sherrill, Iowa. Carl was born on December 24, 1935, in Milan, Indiana, to Thomas and Eva (Bohner) Richardson. The family moved to a farm where he lived during his school years. Carl was baptized into and was a member of St. Paul’s Lutheran Church in Milan until he was married. On June 9, 1962, Carl married Margery Kestler of Napoleon, Indiana, at St. Peter’s United Church of Christ at Fink’s Corner. They raised two children, their daughter Kimberly Sue, and their son Eric Lee. Carl attended school in Milan for twelve years graduating in 1954. After high school graduation he started college but interrupted his studies to serve in the United States Air Force from 1957-1961. He went on to get a bachelor’s degree in Aeronautical Engineering from Tri-State College in Indiana. He went to work designing airplanes as an aerodynamicist for Lockheed Aircraft in Marietta, Georgia, where he assisted in the design of the C-5 aircraft. Early in his engineering career, Carl felt God was leading him to the ministry. He received his Master of Divinity from Evangelical Lutheran Theological Seminary in Ohio. After serving in churches in Pennsylvania, Ohio, and Illinois, Carl left the ministry for about five years and worked as a chemist and quality control engineer for Lehigh Cement Company in Mitchell, Indiana. He returned to the ministry and served in churches in Missouri and Iowa. He retired having served as minister of the Missouri Synod Lutheran Church for over 45 years. Carl devoted his adult life to serving God. As a minister he provided preaching, teaching, pastoral care, and organizational leadership. Carl trusted God completely. He lived to serve God and tried to allow God to order his steps. He was a fine example of a man who loved Jesus. Carl would say “This is not of ourselves. We have only received and been stewards of the love, the grace, and the sacrifice of our God. All Glory Be to God; Father, Son, and Holy Spirit!” Carl is survived by his wife of 59 years, Margery (Kestler) Richardson of Cedar Rapids, Iowa; their two children, Kimberly Sue Richardson of Cedar Rapids, and Eric (Lisa) Richardson of Port Charlotte, Florida; their two grandchildren, Spencer Richardson of Lexington, Kentucky and Jesse Romans of Flemingsburg, Kentucky; and their two great-grandchildren, Zander and Bentlee Romans. He is also survived by his siblings, Harvey (Nancy) Richardson of Hebron, Kentucky, Shirley Bocock of Milan, Indiana, Darlene (Tom) McGovern of Marion; sister-in-law, Carolyn Kestler of Osgood, Indiana, and other extended family members. Carl was preceded in death by his parents. Memorials may be given in memory of Pastor Carl John Richardson to St. Paul’s Lutheran Church in Marion, Iowa, or to St. Matthew Lutheran Church in Sherrill, Iowa, or to a charity of the donor’s choice.

The family of Carl John Richardson created this Life Tributes page to make it easy to share your memories.

Send flowers to the Richardson family.