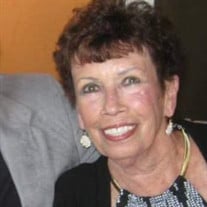 Covid-19 did not take her away; God took her to His perfect place. Carol Ann Stateler passed from this earth to be safe in the arms of Jesus on the Lord’s Day, Sunday, November 22, 2020. She was 84 years old. A celebration of Carol’s life will take place at a later date when the family can safely come together. Murdoch-Linwood Funeral Home & Cremation Service assisted the family. Carol was born in Chicago, Illinois on June 19, 1936. In 1954, she married her high school sweetheart, Victor Stateler, after he whisked her away to Mississippi and they secretly eloped. They were only married for five days before Victor was sent to Korea to serve his country in the United States Air Force. It would be a year before they saw each other again when Carol moved to Hawaii to be with her Airman until he was sent to Japan. She moved back home and patiently awaited his return. After serving in the military, Victor came home and enrolled in the University of Illinois. Carol worked and supported the family while Victor studied and completed his hours for graduation. After graduating, Victor and Carol eventually settled in Cedar Rapids, Iowa, where Carol worked as a media secretary in several elementary schools. While celebrating sixty years of marriage, Carol’s daughters threw them a surprise wedding ceremony. Her two grandsons walked her down the aisle. Her groom looked at his beautiful bride walking toward him the way one looks at their partner in life and love, the mother of their children, their soulmate, their world, or as Victor would say, his “Best Asset”, the very best part of him. It is not surprising that Carol was voted “Best Personality” in high school or that she was made the President of the Caring Friends club at Cottage Grove Place where she and Victor reside. Carol had a smile and a laugh that lit up any room she was in. Everything about her was sincere. She cared about everyone and the tiniest details of their lives. “How are you?” was not a casual question to her. She sincerely wanted to know the answer and if there was anything she could do to help solve a problem. She was present in peoples’ lives. Carol’s greatest joy in life was surely her role as a grandmother and great-grandmother. She adored her grandchildren and relished every moment and tradition she shared with them. From “Gramie Toast” to gingerbread houses, all of her “grands” have unbelievably special memories of their grandmother’s fierce love. Her beautiful life will forever be cherished in the lives of her husband, Victor L. Stateler; her three daughters: Debra (Daniel) Lord, Barbara (Antonio Esparza) Guerra and Nancy (Christopher) Kumsher; her seven grandchildren: Zachary (Hessica) Lord, Julianne (Britain) Wilson, Madolyn Kumsher, Aubry Guerra, Trey Guerra, Isabelle Kumsher and Emma Kumsher; and her three great-grandchildren: Jazmyn Wilson, Gideon Wilson and Decklyn Lord. She was preceded in death by her parents and two brothers, Donald and Robert Klenk. Victor and the family would like to thank Carol’s doctor and friend, Dr. Mary Anne Nelson for the many years of personal care; her oncologist, Dr. Chirantan Ghosh; the staff at Cottage Grove Place and the many, many friends from their church, Cedar Valley Bible Church. In remembrance of Carol, the family asks that any charitable donations be made to Cedar Valley Christian School in Cedar Rapids, Iowa or Palm Valley Animal Society in Edinburg, Texas.

Covid-19 did not take her away; God took her to His perfect place. Carol Ann Stateler passed from this earth to be safe in the arms of Jesus on the Lord&#8217;s Day, Sunday, November 22, 2020. She was 84 years old. A celebration of Carol&#8217;s... View Obituary & Service Information

The family of Carol Stateler created this Life Tributes page to make it easy to share your memories.

Covid-19 did not take her away; God took her to His perfect place....

Send flowers to the Stateler family.