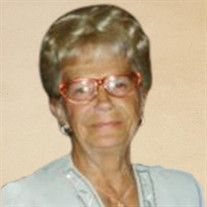 Carolyn (Klein) Duffy, 93, of Amana, Iowa, died Thursday, January 6, 2022. A visitation will be held from 4 – 6 p.m. on Monday, January 17, 2022, at Murdoch-Linwood Funeral Home & Cremation Service in Cedar Rapids, Iowa. A funeral service will take place at 10 a.m. on Tuesday, January 18, 2022, at the funeral home. Burial will follow at Mount Calvary Cemetery in Cedar Rapids, Iowa. A livestream of the funeral service may be accessed on the funeral home website tribute page for Carolyn, under “photos and videos or media,” starting at 10 a.m. on Tuesday, January 18, 2022. Carolyn was born September 14, 1928, in Sioux Center, Iowa, the daughter of Carrie (Proper) and Herman Klein, Jr. She graduated from Sioux Center High School around 1945. Carolyn was married to Orise Utecht from 1946-1964. She lived in LeMars, Iowa, and moved to Cedar Rapids in 1965. She worked as a payroll clerk and security guard, retiring around 1991. Carolyn was married to James Duffy from 1965-1996. She was a member of Hope United Church of Christ in Hiawatha, Iowa. Carolyn was married to Robert Burk from 2003-2015. She enjoyed being part of SaPaDaPaSo and planning the annual St. Patrick’s Day parade. Carolyn loved crocheting and knitting, playing BINGO and dice games, and traveling to warmer climates. Above all else, she loved spending time with her family. Survivors include her brother, Harold (Diana) Klein; granddaughters, Amy (Nate) Lefebvre, and Abby Utecht; grandsons, Brian (Laura) Michalec, James Michalec, Carey (Candice) Rance, and Eric Rance; nieces and nephews, Jeff (Sherrie) Klein, Greg Klein, Lisa (Al) Klein Carlile, Connie (Gene) Sager, and Robert (Connie) Weenink; many great-grandchildren, great-nieces, and great-nephews. She was preceded in death by her parents, Carrie and Herman Klein, Jr.; husbands; children, Salana Rance and Harlan Utecht; and sister, Pearl (Vernon) Grasz. In lieu of flowers, donations can be made in her honor to Amana Retirement Community or the Alzheimer’s Association.

The family of Carolyn (Klein) Duffy created this Life Tributes page to make it easy to share your memories.