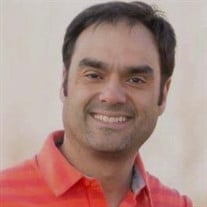 Cesar A. Gonzalez Camejo, 46, of Marion, Iowa, passed away unexpectedly of a heart attack on Tuesday, December 15, 2020, at Mercy Medical Center in Cedar Rapids, Iowa. A private Funeral Mass will be held at St. Joseph Catholic Church in Marion, with Reverend David O’Connor officiating. Cremation rites will follow. A livestream of the Funeral Mass is being provided by St. Joseph Catholic Church at https://www.youtube.com/watch?v=shAVjkMjKNA at 10:30 a.m. on Friday, December 18, 2020. Murdoch Funeral Home & Cremation Service in Marion is assisting the family. Cesar was born September 10, 1974, in Maracay, Venezuela, the son of Cesar Gonzalez and Sara Camejo de Gonzalez. He graduated from high school in Venezuela and went on to attend college in Venezuela and the United States, obtaining an associate’s degree in Electronic Engineering Technology at Kirkwood Community College in Cedar Rapids. He met the love of his life, Rebecca “Becky” K. Norlin, while studying abroad in Oxford England. Cesar and Becky were united in marriage on June 16, 2007, in Robins, Iowa. He worked at Skyworks Solutions in Cedar Rapids, as a Layout Designer. Cesar enjoyed nature, biking, traveling, and keeping in touch with his extended family in Florida, Venezuela, and around the world. Most of all, he loved being with his wife and children. He will be greatly missed by all who knew and loved him. Cesar is survived and lovingly remembered by his wife of 13 years, Becky Gonzalez of Marion; four sons, Noah Cesar, Kai Alexander, and twins, Santiago Kenneth and Javier Steven; mother, Sara Camejo of Weston, Florida and Maracay, Venzuela; sister, Hilda Gonzalez Camejo of Weston, Florida; mother-in-law, Jennifer Blair of Marion; sister-in-law, Sara Norlin of Marion; niece, Nicole Stephanie Crespo Gonzalez; two nephews, Caleb Bradley Kenneth Stickly and Cesar Alexander Crespo Gonzalez; and father-in-law, Kenneth (Lisa) Norlin of Riva, Maryland. He was preceded in death by his father, Cesar Gonzalez; and father-in-law, Steven Blair. Memorials in Cesar’s memory may be directed to the family to benefit the education of his children.

Cesar A. Gonzalez Camejo, 46, of Marion, Iowa, passed away unexpectedly of a heart attack on Tuesday, December 15, 2020, at Mercy Medical Center in Cedar Rapids, Iowa. A private Funeral Mass will be held at St. Joseph Catholic Church in Marion,... View Obituary & Service Information

The family of Cesar A. Gonzalez Camejo created this Life Tributes page to make it easy to share your memories.

Cesar A. Gonzalez Camejo, 46, of Marion, Iowa, passed away unexpectedly...