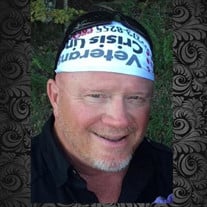 Charles “Chuck” James Mincks, 64, of Marion, Iowa, passed away on Wednesday, May 12, 2021. The family will greet friends from 2 – 5 p.m. on Sunday, May 16, 2021, at Murdoch Funeral Home & Cremation Service in Marion. A Funeral Service will be held at 10:30 a.m. on Monday, May 17, 2021, at the funeral home conducted by Pastor Rick Gail. The family will also greet friends one hour prior to the service on Monday at the funeral home. All guests are respectfully requested to wear a face mask and practice social distancing. Chuck was born on May 20, 1956, in Bloomfield, Iowa, the son of James and Dixie (Cole) Mincks. He was a 1974 graduate of Iowa City High School in Iowa City and then proudly served in the United States Marine Corps. On August 7, 1993, at St. Paul’s Methodist Church in Cedar Rapids Chuck was united in marriage to Sue Klenske. He was a Cedar Rapids police officer until retiring in 2010. Chuck enjoyed volunteering, riding his motorcycle, Critter Crusaders, Teufelhund Veterans Group, and his many dogs. He is survived and lovingly remembered by his wife, Sue Mincks of Marion; three children, Christi (Duane) Geyer of North Liberty, Iowa, Nikki (Brandon) Cuaresma and Mike Mincks, all of Anchorage, Alaska; five grandchildren, Faith Geyer of Cedar Rapids, Iowa, Addy Solberg, Jace Cuaresma, Koa Cuaresma and Adira Mincks, all of Anchorage; father, James Mincks of Marion; brother, Chris (Lisa) Mincks of Crystal, Minnesota and their children, Duncan and Graham; father-in-law, James Klenske of Waukon, Iowa; brothers and sisters-in-law, Beth Kloster of Marengo, Tom (Lisa) Klenske of Cedar Falls, Tim (Kathy) Klenske of Davenport, and Mary Prior of Houston, Texas; and many nieces and nephews. Chuck was preceded in death by his mother, Dixie and mother-in-law, Ele Klenske. Memorials in Chuck’s memory may be directed to Critter Crusaders or Teufelhund Veteran Group.

The family of Charles "Chuck" James Mincks created this Life Tributes page to make it easy to share your memories.

Send flowers to the Mincks family.