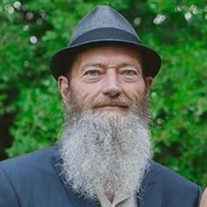 Charles White, 65, of Central City, Iowa, passed away from a sudden illness on Wednesday, May 5, 2021, at the University of Iowa Hospitals and Clinics in Iowa City, Iowa. The family will greet friends from 2 – 4 p.m. on Saturday, May 8, 2021, at Murdoch Funeral Home & Cremation Service in Marion. Private graveside services conducted by Celebrant, Casey Hepker with Military Honors provided by United States Navy Honors Detail will take place at Hazel Knoll Cemetery in Matsell Park. All guests are respectfully requested to wear a face mask and practice social distancing. Charles was born on April 16, 1956, in Buffalo, New York, the son of Bill and Joyce (Wright) White. He graduated from Salamanca High School in New York and Community College of Greeley in Colorado. Chuck served in the United States Navy and the Army National Guard. On July 19, 1979, in Boulder, Colorado he was united in marriage to Leigh Rickert. He was a naturally talented artist with passions in wood carving, painting and music. Chuck excelled at the harmonica and was a SPAH member for ten years playing around the country alongside greats. His other passions included the outdoors, hunting, and fishing. Chuck was a gifted storyteller, and his stories are still retold by family and friends. His greatest passion in life was his family. Chuck was a true family man. He is survived and lovingly remembered by his wife of 42 years, Leigh Rickert White of Central City; son, Barry (Antonia) White of Chicago, Illinois; daughters, Hannah White (Josh) and Laura (Ben) Kilburg, all of Marion; three grandchildren, Wrenley, William, and Ethan; two sisters, Blanche (Pete) Farnham of Salamanca, New York and Cathy (Randy) Hilliker of Irving, New York; and two brothers, William (Brenda) White of Belmont, New York and Barry White of Salamanca. Charles was preceded in death by his parents; daughter, Isabel Ellen White; and sister, Brenda White.

Charles White, 65, of Central City, Iowa, passed away from a sudden illness on Wednesday, May 5, 2021, at the University of Iowa Hospitals and Clinics in Iowa City, Iowa. The family will greet friends from 2 &#8211; 4 p.m. on Saturday, May 8,... View Obituary & Service Information

The family of Charles "Chuck" White created this Life Tributes page to make it easy to share your memories.

Send flowers to the White family.