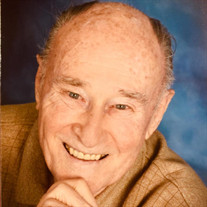 Clellan “Clel” Louis Wildes, 87, of Marion, Iowa, passed away from complications due to COVID-19 on Sunday, February 14, 2021, surrounded by his daughter and little sister, Gerry. He was the oldest of three children and the best big brother anyone could ask for. The family will greet friends from 12:00 to 1:00 p.m. on Thursday, February 18, 2021, at Murdoch Funeral Home & Cremation Service in Marion. A funeral service will follow at 1:00 p.m. on Thursday at the funeral home, conducted by Pastor John Albertson. Burial will take place at Oak Shade Cemetery in Marion. All guests are respectfully requested to wear a face mask and practice social distancing. A livestream of the funeral service may be accessed on the funeral home website tribute page for Clel, under “photos and videos or media”, starting at 12:00 p.m. on Thursday. Clel was born on May 10, 1933, to Frank and Dorothea (Wilson) Wildes in North Mankato, Minnesota. He attended two small country schools in Madison Lake and Waterville, Minnesota (where he had to walk miles and miles uphill to school in the snow) before graduating from Truman High School in Truman, Minnesota in 1950. He went on to attend Mankato Vocational College and also served four years in the United States Air Force, spending one of those years in Morocco. He married Jane Simmons on January 16, 1955, at St. Paul’s Lutheran Church in Fairmont, Minnesota. After his four-year service in the Air Force, they made their home in Marion, until he moved to an assisted living facility in Cambridge, Minnesota in 2017, to be closer to his sister Gerry. After leaving Minnesota for sunnier, “warmer” pastures in Cedar Rapids in 1952, Clel worked as an electronics technician for Rockwell Collins for forty years, where he had the opportunity to work on various projects here in the United States and abroad. He believed strongly in his faith and was a charter member of Faith Lutheran Church in Marion. Clel was also a master cribbage player, the best apple pie maker in the world and his brilliant hazel eyes always lit up the room. A very special thank you to all of the wonderfully caring nurses at Cambridge Medical Center for comforting him during his peaceful transition. Clel was loved by so many and will be greatly missed by all who he touched. He was preceded in death by his parents; his wife, Jane; and son, Mark. Clel is survived by his daughter, Susan in Mexico; his brother, David (Cheryl) in Rio Rancho, New Mexico; and his sister, Gerry in Cambridge; and many nieces and nephews.

Clellan &#8220;Clel&#8221; Louis Wildes, 87, of Marion, Iowa, passed away from complications due to COVID-19 on Sunday, February 14, 2021, surrounded by his daughter and little sister, Gerry. He was the oldest of three children and the best... View Obituary & Service Information

The family of Clellan "Clel" Louis Wildes created this Life Tributes page to make it easy to share your memories.

Send flowers to the Wildes family.