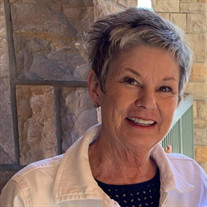 On Friday, August 28, 2020, Crissa Jo Hyduk, 65, of Marion, Iowa, passed away peacefully after a hard-fought battle with pancreatic cancer. A private family service will be held at First United Methodist Church in Marion conducted by Pastor Mike Morgan. Burial will take place at Cedar Memorial Park Cemetery, Cedar Rapids. A Celebration of Life for the public will be held from 2 – 5 p.m. on Saturday, September 5, 2020, at Olympic Southside Theater, located at 1202 3rd Street SE Suite 200, Cedar Rapids. All guests are respectfully requested to wear their brightest colors, a face mask and practice social distancing. Crissa was born March 8, 1955, in Cedar Rapids, Iowa, the daughter of George and Anita (Calvert) Finn. She graduated from Marion High School in 1973 and worked for Hy-Vee for over 28 years. Crissa married her high school sweetheart and the love of her life, Kevin Hyduk, on November 10, 1973, at First United Methodist Church in Marion. Crissa enjoyed shopping from sun up to sun down, but her greatest joy was being a Grammy. While her work here on earth is done, her amazing life will be remembered forever. She had a smile that lit up a room the minute she entered and a personality that made you want to be her best friend. Crissa was diagnosed with cancer in April of 2018. It was from that very moment she began her courageous hard-fought battle. In true Crissa fashion, she fought her illness like a true warrior. She made an everlasting footprint in all the lives she touched. She is survived and lovingly remembered by her daughter, Taryn (Tim) Burger of Marion; grandson, Hudson Finn Burger; mother, Anita (Delwin) Schons of Marion; sister, Connie (Mike) Jirouch of Marion; sister-in-law, Cathy (Mike) Vint of Marshalltown; brothers-in-law, Brian (Sally) Hyduk of Palm Beach Gardens, Florida and Barry (Kathy) Hyduk of Naples, Florida; and numerous nieces and nephews. Crissa was preceded in death by her father, George Finn; husband, Kevin Hyduk; and son, Jason Jon Hyduk. The family would like to express their heartfelt gratitude to the doctors, nurses, and staff at Hall-Perrine Cancer Center. These nurses and doctors give so much hope and happiness to families. Crissa’s last days were spent at Dennis & Donna Oldorf Hospice House of Mercy in their wonderful care. The nurses and staff made this tough time more bearable and the family is forever grateful. In lieu of flowers, memorials may be directed to the Hall-Perrine Cancer Center or Dennis & Donna Oldorf Hospice House of Mercy.

On Friday, August 28, 2020, Crissa Jo Hyduk, 65, of Marion, Iowa, passed away peacefully after a hard-fought battle with pancreatic cancer. A private family service will be held at First United Methodist Church in Marion conducted by Pastor... View Obituary & Service Information

The family of Crissa Jo Hyduk created this Life Tributes page to make it easy to share your memories.

Send flowers to the Hyduk family.