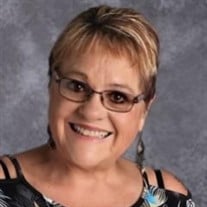 Dana K. Hols, 62, of Oskaloosa, Iowa died on March 26, 2021, less than three weeks after finding out her back pain was actually terminal metastatic lung cancer that had spread throughout her body. A smoker for most of her life, Dana had finally quit for good seven years ago, but as she said it wasn’t soon enough. The warning labels are there for a reason kids, smoking kills! Dana was born on December 18, 1958, in Springfield, Ohio, to Ray and Gretchen Price. She was a wild child in her youth. She dropped out of high school and later obtained her GED. Then, in her 30’s she went to college and became a teacher. She definitely didn’t do it for the money, teachers aren’t paid enough. She did it because she was passionate about helping at-risk youth, especially those who others had given up on. Up until just a few weeks ago Dana was a teacher at Oskaloosa Middle School, previously she has taught in Albia and Moulton-Udell. Dana loved her family and her friends who were like her family. Though she suffered with severe depression for much of her life, she was often the life of the party. She loved ugly sweater parties, costume parties, game night parties (Cards Against Humanity was her favorite), wine club parties, you name it. She lived for her annual girl’s weekend getaways with her dearest friends. When her daughters were younger, Dana welcomed their friends into her home with open arms. She always had an extra chair at the dinner table and enough food to feed an army. Dana is survived by her amazing mother, Gretchen Price of Ottumwa; two of her beloved daughters, Heather (Mike) Butterfield of Cedar Rapids, IA and Sara Mosher of Des Moines, IA who must now figure out what to do with their mother’s extensive collection of peacock stuff; the great loves of her life, her granddaughters, Evie and Ella Butterfield; her siblings, Alison Preuninger of Arlington, TX and Karl Price of Ottumwa, IA; niece, Lisa (Dustin) Hodges of Irving, TX; nephew, Chris (Jasmina) Bishop of Waldorf, MD; and many dearly loved friends. While Dana wasn’t a religious person, her family likes to believe she is joining her daughter Kayte Mosher, who preceded her in death, for one big party on the other side. Dana’s father, Ray Price, will likely be there too with a glass of scotch in hand. As will Dana’s rescue beagles, Skeeter and Pheobe, tails waging. Dana’s last wish was to be cared for by a cabana boy in her final days. Special thanks to the compassionate and caring staff at Dennis & Donna Oldorf Hospice House of Mercy for fulfilling her last wish and assigning Joel as her nurse/cabana boy. Dana and her family are strong advocates for organ and tissue donation. Despite cancer ravaging much of her body, she was still able to donate her corneas and give two people the gift of sight. In lieu of flowers, memorials may be made to Iowa Donor Network at IowaDonorNetwork.org/donate or to Stephen Memorial Animal Shelter in Oskaloosa at bit.ly/StephenMemorial A celebration of life is being planned for a later date.

Dana K. Hols, 62, of Oskaloosa, Iowa died on March 26, 2021, less than three weeks after finding out her back pain was actually terminal metastatic lung cancer that had spread throughout her body. A smoker for most of her life, Dana had finally... View Obituary & Service Information

The family of Dana K Hols created this Life Tributes page to make it easy to share your memories.

Send flowers to the Hols family.