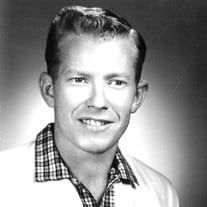 Daniel W. Bahnsen, 88, of Cedar Rapids, Iowa, died Saturday, January 11, 2020, at Mercy Medical Center, Cedar Rapids. Memorial service will be held at 11:00 a.m. Friday, January 17, 2020, at Hillside Wesleyan Church of Cedar Rapids where Dan was a member for over 50 years; his faith was an important part of his life. Pastor Kirk Statler will officiate. Visitation will be held one hour prior to the service at the church. Burial will take place at a later date in Riceville, Iowa. Arrangements by Murdoch-Linwood Funeral Home & Cremation Service, Cedar Rapids. Dan was born October 15, 1931, to William and Verna Bahnsen in Plymouth, Iowa. He graduated from McIntire High School with the class of 1950. Dan served in the U.S. Army from March of 1952, until his honorable discharge in February of 1954. He married H. Ann Dunbar on July 3, 1957, at the Little Brown Church in Nashua, Iowa. He adored his loving wife and they were happily married for over 62 years. To this union four children were born: Denise, Deann, DeWayne, and Dwight. Dan worked in the elevator trade for over 30 years; he was employed by Kona & Otis Elevator. He was a proud member of Local 33 IUEC where he was business manager for three years prior to his retirement. Dan is survived by his wife, Ann; children, Denise (Glen) Maxwell of Flower Mound, Texas, Deann (Dave) Ongie of Springville, Iowa, DeWayne of St. Mary’s, Alaska, and Dwight (Cathie) of Dewey, Oklahoma; nine grandchildren; and four great-grandchildren. He was also survived by his sisters, Dixie Noble of Riceville, Iowa, and Della Chambers of Fort Collins, Colorado; sisters-on-law, Martha (Ray) Zuke of Mason City and Lurene Bahnsen of Hammond, Wisconsin; many nieces, nephews, and special niece, Kathy Wilkerson. Dan relished spending time with his children and elevator buddies. His children have fond memories of the many adventures they had with him including water skiing, traveling, playing card games, and his crazy antics. He was preceded in death by his parents; sister, Donna (Sam) Kontos; brother, Daryl Bahnsen; and brothers-in-law, Lowell Noble and Freeman Chambers. Memorial donations may be directed to Hillside Wesleyan Church.

The family of Daniel W. Bahnsen created this Life Tributes page to make it easy to share your memories.

Send flowers to the Bahnsen family.