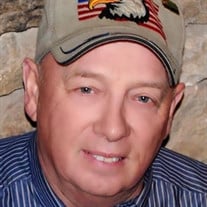 Daniel Edward Kochuyt, 69, of Shellsburg, Iowa, died suddenly at his home January 25, 2021. A public graveside service with military honors will take place at 11 a.m. Saturday, September 18, 2021, at St. Mary's Cemetery, Urbana, Iowa. Guests may bring a lawn chair if they wish. The family respectfully requests that all guests wear masks and practice social distancing. The luncheon previously planned to follow the graveside service has been postponed due to COVID-19 concerns. Private family services were previously held and a recorded video of the funeral Mass may be accessed on the funeral home website tribute page for Dan. Murdoch Funeral Home & Cremation Service, Center Point assisted the family. Dan was born October 19, 1951, in Belle Plaine, Iowa, the son of Albert and Margaret (DePoorter) Kochuyt. After graduation from HLV Community School District, Dan served his country honorably in the United States Navy during the Vietnam War. On June 15, 1996, Dan married Rhonda Wilson in Center Point, Iowa. Dan farmed, owned/operated Kochuyt Tiling and retired from the CRANDIC Railway in 2016. Dan was a member of St. Mary’s Catholic Church, Urbana, Knights of Columbus in Urbana and Victor, and the Victor American Legion. He was a loving and considerate husband, beloved father, and devoted grandfather. Dan loved to tinker and dive into all kinds of projects; he could fix anything. You could often find him whipping up his favorite meals in the kitchen. He and his wife, Rhonda, enjoyed many travel adventures together. Dan enjoyed hunting and fishing and had the opportunity to go on his dream elk hunt with his son and grandson in 2019. Dan had deep faith and he loved the fellowship he celebrated with everyone at his church. He always had fun on stage at karaoke singing his favorite country songs. Dan was happiest when he was helping others. He will be missed by all who knew and loved him. Survivors include his wife, Rhonda Kochuyt of Shellsburg; children, Dale (Suzie) Kochuyt of Atkins, Sherry (Jeremy) Garringer of North English and Jennifer (Matt) Grace of Dysart; step-children, Alisha (Eric) Frese of Norway, Brooke (Matt) Heins of Center Point, Jillian Kramer (Ebie Essien) of Iowa City; grandchildren, Ashley Kochuyt (fiancé, Heith Hinds), Alyssa Kochuyt, Abby and Dominic Garringer, Hannah, Ryan and Zach Grace, Jackson and Cora Frese, and baby Frese due in February, Madeline and Noah Heins and Lauryn and Olivia Essien; siblings, Donna (Lonnie) Jack of Victor, Kathy Roth of Brooklyn and Robert (Melinda) Kochuyt of Ladora; mother-in-law, Hazel Meyocks of Cedar Rapids; and many friends who were near and dear to his heart. He was preceded in death by his parents; brother, Larry Kochuyt; an infant brother; and father-in-law, Raymond Meyocks. Memorials may be directed to the Wounded Warrior Project.

The family of Daniel Edward Kochuyt created this Life Tributes page to make it easy to share your memories.

Send flowers to the Kochuyt family.