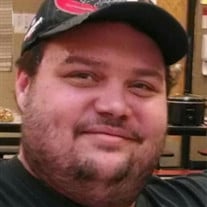 Daniel Lee Kremer, 46, of Central City, Iowa, passed away June 1, 2022, in Houston, Texas. He had been receiving medical care at MD Anderson Cancer Center for Acute Myeloid Leukemia. Visitation will take place from 4 to 7 p.m. on Wednesday, June 8, 2022, at Murdoch Funeral Home & Cremation Service of Central City. Service will be held at 10:30 a.m. on Thursday, June 9, 2022, at the United Church of Christ in Central City, with visitation an hour prior to service at the church. Burial will follow at Mt. Clark Cemetery in Central City, Iowa. Dan was born the son of Larry and Carol Kremer (Hanson) on February 19, 1976, at Mercy Hospital in Cedar Rapids, Iowa. He graduated from Central City High School in 1994, where he wrestled, played football, and was an active member of the FFA. Dan was best known for his hard work. He was employed at Quaker Oats in Cedar Rapids, Iowa for 26 years, and was a member of the RWDSU Local 110 Union. He owned and operated his own repair shop, Kremer’s Automotive, and took pride in his ability to fix almost anything. One of Dan's greatest pleasures was carrying on the family farm, with his Allis Chalmers, and teaching his daughters how to as well. Dan also enjoyed driving semi for Nagel Grain. Dan was a self-taught musician and guitarist and played in several bands throughout his years. He also loved his road trips, especially to Wisconsin on his cheese runs. Whenever Dan was busy, and with family he was happy. He would lend a hand to anyone in need and made sure all others around him were taken care of. He is survived by his parents; two daughters from a previous marriage, Grace Kremer (Hunter Wilson), and Kylee Kremer; and his significant other of 11 years, Traci Boots, all from Central City, Iowa. He also had two sons of choice, Jacob (Nicole) Shimek of Cedar Rapids, Iowa, and Korey Boots of Alburnett, Iowa. He had three grandchildren, Jaxxon, Christian, and Alizza. He is also survived by his lifelong brother, Gary (Deb) Bell of Alburnett, Iowa; stepsister, Derrie (Don) Rawson of Troy Mills, Iowa; several aunts, uncles, cousins, nieces, and nephews; as well as his dog Jordy, and Bob the cat. The family would like to thank all who sent well wishes, prayers, and offered help through this difficult time. We will be forever grateful, and we know Dan loved and cared for you all. Memorial funds can be directed to the family to be put towards the Darlene Offerman, Brown Family Farm Music Stage.

The family of Daniel Lee Kremer created this Life Tributes page to make it easy to share your memories.

Send flowers to the Kremer family.