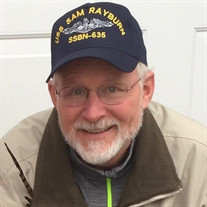 David “Dave” George Eilers, 64, of Cedar Rapids, Iowa, went home to be with his Lord and Savior, Jesus Christ, on Thursday, Jan. 20, 2022, at St. Luke’s Hospital in Cedar Rapids. Family will greet friends and family from 5:00 – 7:00 p.m. on Thursday, January 27, 2022, at Murdoch Funeral Home & Cremation Service in Marion, Iowa. A funeral service will be held at 10:00 a.m. on Friday, January 28, 2022, at Stonebridge Church located at 1829 Stoney Point Road SW in Cedar Rapids. Burial will follow at 1:30 p.m. at Oak Shade Cemetery in Marion. Dave was born on May 29, 1957, in Waterloo, IA, the son of George and Helen (Roberts) Eilers. A 1975 graduate of Central High School, he went on to attend Wartburg College for 2 years where he played baseball and football. He married the love of his life, Cheryl Lynn Davis, on March 25, 1978, in Cedar Falls, Iowa. Dave served honorably in the United States Navy for eight and a half years. During that time, he served on the nuclear submarine, the USS Sam Rayburn. Dave worked at the nuclear power plant in Palo, Iowa, retiring after 31 years. On a typical fall day, you could find Dave walking through the apple orchards or a pheasant field with his springer spaniels. He enjoyed a good game of catch in the backyard with his kids and grandchildren, while telling them the name of the moon coming up in the eastern horizon. His fun-loving, vivacious personality would come out in his interactions with everyone he met, as he never knew a stranger. Dave could talk your ear off about theology and Harry Potter. He always made holidays very meaningful for his family, as traditions were special to him. Because his relationship with Jesus Christ, his Lord and Savior, fueled the way he lived, Dave was very active in teaching Sunday school and Bible studies, working with the youth group, taking kids to teen camp, and challenging those around him to know and love Christ more. As empty nesters, Dave and Cheryl enjoyed ballroom dancing together as well as volunteering weekly at Treasures. Dave will be greatly missed by those who survive him; his wife of 43 years, Cheryl Eilers of Cedar Rapids; three children, Ben (Sharon) Eilers of Cedar Rapids, Sarah (Jonathan) Bunjer of Marion, and Dan (Chelsea) Eilers of Pierre, South Dakota; eight grandchildren, Becca Eilers, Abbie Eilers, Calleigh Eilers, Aaron Bunjer, Eva Bunjer, Alec Eilers, Will Eilers, and JJ Eilers; sister, Diane (Lowayne) Kinzebach of Cedar Falls; and mother-in-law, Janet Davis of Cedar Rapids. He was preceded in death by his parents, George and Helen Eilers; and father-in-law, Wayne Davis.

The family of David "Dave" George Eilers created this Life Tributes page to make it easy to share your memories.

Send flowers to the Eilers family.