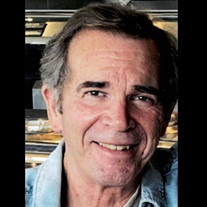 David George Jepsen, 72, of Cedar Rapids, Iowa, passed away Monday, April 18, 2022, at Mercy Medical Center in Cedar Rapids. Visitation: 4 – 7 p.m. Friday, April 29, 2022, at Murdoch-Linwood Funeral Home & Cremation Service in Cedar Rapids. Funeral Service: 10 a.m. Saturday, April 30, 2022, at the funeral home. David was born on May 2, 1949, in Clinton, Iowa, the son of Darrell and Teresa (Crowley) Jepsen. He graduated from Clinton High School and attended Mount Saint Clare College in Clinton. David obtained his BA in liberal arts from Western Illinois University, where he also holds the record for the most theater credits in the history of the university. He was a certified cytotechnologist and worked in pharmaceutical sales until his retirement. David was a member of the Clinical Society of Pathologists. David was passionate about theater and politics. He was instrumental in the EPA review into a coal tar situation in Clinton and managed two victorious state senate campaigns. David was very involved in performing arts and enjoyed directing and writing his own plays. He was active in community theater in Cedar Rapids and Tipton including performances in “The King & I,” “The Music Man,” “White Christmas,” and “Cave Dwellers,” amongst many others. One of his earliest performances included his role as Buffalo Bill in “Indians.” David was loved by many and will be deeply missed. Survivors include his daughter, Regina Sullivan (fiancée, Jeremy Modlin) of High Point, North Carolina; grandchildren, Alecia Jepsen, Joseph Miller, and Devin Holsenbeck; great-grandchildren, Hailey Meyers and Joseph “Little Joe” Miller; siblings, Nancy Pawlik of Casper, Wyoming and Andy (Cheryl) Jepsen of St. Charles, Missouri; significant other, DeeAnn Anderman of Cedar Rapids; and nieces and nephew, Heather McQueen, Rebecca Gardner, and Wyatt Pawlik. David was preceded in death by his parents. Memorials may be directed to the family.

The family of David George Jepsen created this Life Tributes page to make it easy to share your memories.

Send flowers to the Jepsen family.