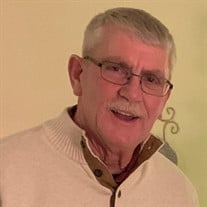 David H. Knott, 68, passed away unexpectedly on Monday, February 1, 2021, at his home in rural Ryan. The family will greet friends from 1 to 5 p.m. on Sunday, February 7, 2021, at Murdoch Funeral Home & Cremation Service in Marion, Iowa. A Funeral Mass will be held at St. Joseph Catholic Church in Marion, officiated by Father David O’Connor. A livestream of the Mass may be accessed at https://youtu.be/s7fk5GgYo8I. Burial will take place on Monday, at St. Patrick’s Cemetery in Monti, Iowa. All guests are respectfully requested to wear a face mask and practice social distancing. David was born on September 24, 1952, in Manchester, Iowa, the son of Harold Thomas and Arlene Mae (Mangold) Knott. He was a 1970 graduate of North Linn High School and went on to attend Kirkwood Community College and the University of Iowa, earning a degree in Criminal Justice. On September 20, 1975, he was united in marriage to Diane Marie Takes at St. Patrick’s Catholic Church in Monti. David’s primary love was caring for his family and homestead. He exemplified the phrase, “Anything worth doing is worth doing well.” This can be seen in his relationship with his family and friends, any woodworking and home improvements he did, and the impeccable lawn and landscaping at the family home. David’s second love was his law enforcement career. David worked for the Linn County Sheriff’s Office retiring as Captain in 2016, with 42 years of service. David will be greatly missed by all who knew, loved, and counted on him. David is survived and lovingly remembered by his wife of 45 years, Diane Knott of Ryan; two children, Cathy (Brad) Walz of Marion and Matt (Meghan) Knott of Canton, Georgia; five grandchildren, Ethan, Eleanor, and Elizabeth Walz, and Logan and Kennedy Knott; two sisters-in-law, Susan Knott of Independence, Iowa, and Pat (Mark) McCright of Green Valley, Arizona; two brothers-in-law, Carroll Takes of Ryan, Iowa, and Jim (Julie) Takes of Central City; and several nieces and nephews. He was preceded in death by his parents, Harold and Arlene Knott; two brothers, Greg and Bruce Knott; and a special aunt, Frances Mangold. In lieu of flowers, a memorial fund has been established. Memorials may be sent directly to the family at 3131 110th Avenue in Ryan, Iowa, 52330, to be designated later.

David H. Knott, 68, passed away unexpectedly on Monday, February 1, 2021, at his home in rural Ryan. The family will greet friends from 1 to 5 p.m. on Sunday, February 7, 2021, at Murdoch Funeral Home & Cremation Service in Marion, Iowa. A Funeral... View Obituary & Service Information

The family of David H. Knott created this Life Tributes page to make it easy to share your memories.

Send flowers to the Knott family.