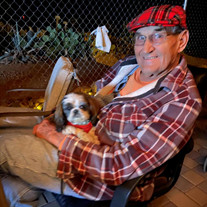 David M. Machula, 81, of Springville, Iowa, passed away on Wednesday, August 25, 2021, at St. Luke’s Hospital in Cedar Rapids, Iowa. A Celebration of David’s life will be held from 1 to 4 p.m. on Saturday, September 11, 2021, at Sally’s on Broadway in Springville. A private family graveside service with military honors will take place at Springville Cemetery in Springville. Murdoch Funeral Home & Cremation Service in Marion, Iowa, is assisting the family. David was born on June 12, 1940, in Cedar Rapids, Iowa, the son of Milo and Bessie (Cimprich) Machula. He graduated from Springville High School and went on to serve honorably in the United States Air Force during Vietnam. David served for eight years, stationed in Japan, MacDill Air Force Base in Florida, and Nellis Air Force Base in Nevada. He was united in marriage to Marla Machula on October 16, 1964, in Zolfo Springs, Florida. Dave farmed in rural Springville for many years. He also worked for Northwestern Bell, later known as US West, until retirement. David enjoyed woodworking and the outdoors, camping, and traveling with his wife, Marla. They enjoyed spending several years wintering in Arizona. David will be greatly missed by all who knew and loved him. David is survived and lovingly remembered by his son, Michael (Melody) Machula of Fairfax, Iowa; daughter, Michele Machula of Springville; two grandchildren, Cassie (Caleb) Shaw and Emily (fiancé, Brady Even) Machula; great-granddaughter, Murphy Jade “MJ” Shaw; and brother, Carl (Hilda) Machula of Marion. He was preceded in death by his parents; wife, Marla on July 3, 2021; brother, Steven Machula; and sister, Neola Olsem. Memorials in David’s memory may be directed to UnityPoint Hospice.

The family of David Milo Machula created this Life Tributes page to make it easy to share your memories.

David M. Machula, 81, of Springville, Iowa, passed away on Wednesday,...

Send flowers to the Machula family.