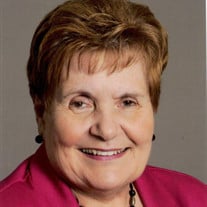 Dawn L. Baker, 77, of Marion, Iowa, passed away on Sunday, October 11, 2020, at her home in Marion. The family will greet friends from 4:00 to 7:00 p.m. on Wednesday, October 14, 2020, at Murdoch Funeral Home & Cremation Service in Marion. A Funeral Service will be held at 10:30 a.m. on Thursday, October 15, 2020, at Marion Methodist Church located at 5050 REC Drive in Marion, conducted by Pastor Mike Morgan and Vicki Standley. Burial will follow at 1:00 p.m. at Linwood Cemetery in Cedar Rapids, Iowa. All guests are respectfully requested to wear a face mask and practice social distancing. Dawn was born January 24, 1943, in Cedar Rapids, the daughter of George and Thelma Kofron. She was a 1961 graduate of Jefferson High School and went on to attend nursing school, graduating in 1963. On June 24, 1966, Dawn was united in marriage to Thomas Carney. To this union two children were born, Brent and Brooke. Thomas and Dawn later divorced. On September 10, 2005, she was united in marriage to Robert Baker. He preceded her in death on May 1, 2019. Dawn enjoyed nursing for over 46 years. She was an active member of Marion Methodist Church and a former member of the Junior League, Children’s Theatre and PEO Chapter. In 2004, Dawn wrote and published the copyright booklet entitled “Fear Not Breast Cancer” and handed out numerous free copies. She enjoyed sewing, quilting, cooking, and traveling. Dawn traveled 48 of the 50 United States and several European countries. She will be greatly missed by all who knew and loved her. Dawn is survived and lovingly remembered by her children, Brent Carney and his wife, Rosey, of Easton, Pennsylvania and Brooke Kish and her husband, Warren, of Evergreen, Colorado; and two grandchildren, twins, William Kish and Isabelle Kish. In addition to her second husband, Robert Baker, Dawn was preceded in death by her parents; and former husband, Thomas Carney. In lieu of flowers, memorials in Dawn’s memory may be made to the Marion Methodist Church, or to the Community Health Free Clinic at www.communityhfc.org or mail to: 947 14th Avenue S.E. in Cedar Rapids, Iowa, 52401.

The family of Dawn L. Baker created this Life Tributes page to make it easy to share your memories.

Send flowers to the Baker family.