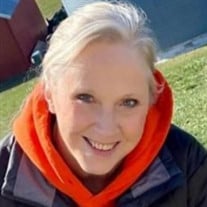 Deanna Lynn Hixson, 58, of Onawa, Iowa, formerly of Cedar Rapids, Iowa, passed away on Friday, December 10, 2021, at St. Luke’s Hospital, Cedar Rapids. In agreement with her wishes, cremation has taken place. The family will greet friends and family from 3 – 5 p.m. on Friday, December 17, 2021, at Murdoch-Linwood Funeral Home & Cremation Service in Cedar Rapids, where a memorial service will follow at 5 p.m. Pastor Steve Irwin will officiate. A private family inurnment will take place at a later date at St. Patrick Cemetery in Fairfax, Iowa. A livestream of the funeral service may be accessed on the funeral home website tribute page for Deanna, under “photos and videos or media,” starting at 5 p.m. on Friday, December 17, 2021. Deanna was born December 13, 1962, in Cedar Rapids, the daughter of James and Marlena (Buhrmann) Kerr. She was a 1981 graduate of Kennedy High School, where she was on the varsity POM squad her junior and senior years. That summer of 1981, Deanna gave her life to Christ and was baptized in the Pacific Ocean, while attending a Christian Youth Camp. She was also a graduate from Kaplan University. Deanna was united in marriage to Randall “Randy” K. Hixson on August 3, 2007, in Maui, Hawaii. Earlier in life, she owned and operated her in-home daycare for 20 years. She later owned and operated the OnaView Apartments in Onawa. Deanna also enjoyed her time as a Mary Kay Consultant. Deanna was very generous and was the most giving person you would know. She would give anything to anyone and even donated one of her kidneys, 20 years ago, to her brother, Gary. Deanna also gave the most precious gift of life at the time of her death by donating her organs through Iowa Donor Network. She was an incredibly fun grandma that even had her scuba diving and pilot’s license. Deanna adored her eight grandchildren and loved spending time with her family. She will be greatly missed by all who knew and loved her. Deanna is survived and lovingly remembered by her children, Mandrea (Tom) Dolphin of Marion, Iowa, Steven (Ashley) Evans of Cedar Rapids, and Cara (Brad) Tower of Fairfax, Iowa; step-sons, John (Markus) Hixson of Cedar Rapids, and Aaron Hixson of Cedar Rapids; grandchildren, Ty, Gustus, and Eli Dolphin, Abriel Evans, and Brady, Kyler, Emberlee, and Brooks Tower; brother, Greg (Barb) Kerr; sister-in-law, Crystal Kerr; several nieces and nephews; as well as her beloved and faithful dogs including her Great Pyrenees, King Soloman “Sully” and her Puddle Pointer, Keurig. She was preceded in death by her parents, James and Marlena Kerr; husband, Randy Hixson; brother, Gary Kerr; and one granddaughter, Lucy Tower. Deanna’s passion was fighting against human sex trafficking. In support of her wishes and in lieu of flowers, the family has respectfully requested that any memorials be made in her memory to Chains Interrupted, PO Box 583, Cedar Rapids, Iowa 52406.

The family of Deanna Lynn Hixson created this Life Tributes page to make it easy to share your memories.

Send flowers to the Hixson family.