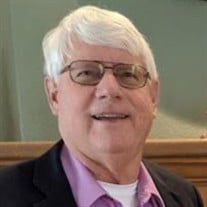 Dennis (Denny / Bullet) Neil Norton, 74, of Hiawatha, Iowa, passed away on Wednesday, May 5, 2021, as a result of cancer. Mother Gump: “Life is like a box of chocolates; you never know what you’re going to get!” A funeral Mass will be held at 10:30am on Tuesday, May 11, 2021, at St. Elizabeth Ann Seton Parish in Hiawatha, officiated by Father Gary Mayer, with a gathering one hour prior at the church. A luncheon will follow after the mass. A private burial will follow at Mount Calvary Cemetery in Cedar Rapids per the family. Visitation with the family will be held on Monday, May 10, 2021, at Murdoch-Linwood Funeral Home & Cremation Service, 520 Wilson Avenue SW in Cedar Rapids from 4pm until 7pm. Denny was the fourth son of Bill & Ilene (Biggart) Norton and was born February 24, 1947, in Anamosa, Iowa. He spent his whole childhood in Anamosa graduating from High School in 1965. On February 19, 1966, he was united in marriage to Linda Kay Leonard at St. Patrick’s Church in Anamosa. They were married 55 years and had two children; Vicky Norton and James Norton. They adopted their grandson, Jamison Neil Norton, and raised him since his birth. Denny graduated from American Institute of Commerce (Business College) in Davenport Iowa in 1971; traveled to Hickory, North Carolina, accepting a job as a Corporate Accountant. Denny and his family moved back to Iowa in 1973 accepting a finance job at Collins/Rockwell-Collins and worked there for a total of 38 years, retiring in January 2007. Denny was a Little League Coach in Anamosa, a Hiawatha Kids League Coach, long-time member of St. Elizabeth Ann Seton Parish, was active in the church in their early years at the parish (Finance Chair, Usher), held a Hiawatha City Council position for eight years and was a board member of the Planning & Zoning committee for two years. He also held a board position on the Linn County Crime Stoppers organization for a number of years. Denny is survived by his wife, Linda of Hiawatha; his daughter, Vicky of Cedar Rapids; and his son, Jamie of Cedar Rapids. He also has four grandkids, Ryan (Jolene) Norton of Marion, Iowa, Connor of Hiawatha, and Jamison of Hiawatha. Also, he has four great-grandkids, Joshua, Sammie, Carly and Wesley. Also surviving are his brother, Steve (Carol) Norton; and sister, Sandra Brunscheen, both of Cedar Rapids. Also, he is survived by brothers-in-law, Jack and Jim Leonard; and sisters-in-law, Luanne Norton of Dubuque, Dorothy Norton of Monticello, and Sheryl Leonard of Anamosa; and many cousins, nieces and nephews (favorite nephew, Shane Norton). Denny was preceded in death by his parents, Bill & Ilene Norton; brothers, Don (1997) and Billy (2015); his grandparents, Red (1959) & Iva (1965) Norton and Cloyd (1978) & Dolly (1962) Biggart; and several in-laws, aunts, uncles, and cousins. Denny so loved growing up in Anamosa with his fellow Pismire friends, primarily Speedy – Paul, Tank – Bill, Weasel – Jan, Muskie – Gary, Stud – Al and Bullet – Denny. They enjoyed getting into mischief such as riding the bumpers of cars during the winter months, throwing snowballs at cars (tomatoes during spring) while on top of most the downtown buildings of Anamosa, camping by the Wapsi and just having fun raising hell. Dennis was married to the love of his life for 55 years! His wife, Linda, was always so supportive of the actions he took during his life. The number of hours he worked at his jobs was excessive as she stayed home raising the kids and making the decisions that came with that role. She eventually worked outside the home at Iowa Manufacturing, working 35 years until her retirement in 2011. Denny always believed he was blessed to have her as his loving spouse. He could not have accomplished what he did in life without her being there and loving him the way she did. Denny so loved his grandkids and great-grandkids. He would do anything for them, helping them in any way he could. His efforts to help raise Ryan, Connor, and Jamison were very special to him; they meant everything to him. This did not take away his love for the other grandkids – Joshua, Sammie, Carly and Wesley. They also meant the world to Denny! Denny was connected to his brother, Steve, in an unbelievable way; attending sports events for over 40 years together, ending up creating many “Norton Moments”, building his brother Don’s memorial together was special as well. Denny missed his brother Bill a lot after his passing in 2015; it was always the 4 of them (Bill, Steve, Denny and baby sister Sandra) growing up together at South Garnavillo Place in Anamosa and being connected during their lives. The most famous architecture where we lived was an igloo built by baby sister Sandra and Dennis. It too was a joy in his early years following brother Don play as a Hawkeye and San Diego Charger. Yea, though I walk through the valley of the shadow of death, I will fear no evil: for thou art with me; thy rod and thy staff they comfort me. Surely goodness and mercy shall follow me all the days of my life: and I will dwell in the house of the Lord forever. Thanks to medical personnel for all they did for Dennis in his time of need. We ask that you contribute to our grandson’s “Jamison Neil Norton Fund” to help him as life moves on.

The family of Dennis 'Denny' 'Bullet' Norton created this Life Tributes page to make it easy to share your memories.

Send flowers to the Norton family.