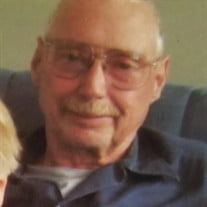 Dennis “Denny” E. Marsh, 85, of Marion, Iowa, passed away peacefully on Thursday, July 29, 2021, after a brief illness. Private family services will be held with burial at Cedar Memorial Park Cemetery in Cedar Rapids, Iowa, with Military Honors provided by United States Coast Guard Honor Detail. Murdoch Funeral Home & Cremation Service in Marion is assisting the family. Dennis was born on October 23, 1935, in Cedar Rapids, Iowa, the son of Richard and Alberta (Straubinger) Marsh. He graduated from Marion High School in 1954. Denny served in the United States Coast Guard, making many patrols in the North Atlantic on the United States Coast Guard “Bibb” acquiring rank and rate of Machinists Mate 2nd Class. On April 17, 1959, in Marion, Denny was united in marriage to Shirley Struchen. He was employed for 35 years as a pressman at the Cedar Rapids Gazette. Following his retirement, Denny worked at MethWick Manor as a night security guard. He enjoyed outdoors, boating and fishing. Denny also enjoyed placing flags on veteran’s graves at Oak Shade Cemetery in Marion. He truly loved his country. He is survived and lovingly remembered by his wife of 62 years, Shirley Marsh of Marion; daughter, Christy Wilson of Marion; four grandchildren, Chad, Ryan (Fiancé, Cassie), Ashton, and Chloe; and one great-grandson, Chase. Denny was quite a man and will be missed by his family. Dennis was preceded in death by his parents; son, Andrew R. Marsh in February of 2016; and brother, Richard Marsh. Donors may choose to direct their memorials in Denny’s memory to any charity that benefits veterans.

The family of Dennis "Denny" E. Marsh created this Life Tributes page to make it easy to share your memories.

Send flowers to the Marsh family.