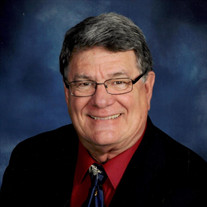 Dennis “Denny” Walter Wright, 77, of Marion, Iowa, passed away peacefully on Wednesday, May 12, 2021, at his home surrounded by his loving family. A Memorial Service will be held at 6:30 p.m. on Tuesday, May 18, 2021, at First Lutheran Church in Cedar Rapids, Iowa, conducted by Pastors Steve Knudson and Bill Waxenberg. Due to the pandemic, seating at the memorial service will be limited. Interested individuals are encouraged to join Denny’s family via livestream at https://firstlutherancr.online.church/ Invited guests are respectfully requested to wear a face mask and practice social distancing. A Private Family Inurnment will take place at Cedar Memorial Park Cemetery in Cedar Rapids. Murdoch Funeral Home & Cremation Service in Marion is assisting the family. Denny was born on March 30, 1944, in Cedar Rapids, Iowa, the son of Robert and Enid (Wahe) Wright. He graduated from Cedar Rapids Washington High School in 1962. In June of 1966, he graduated from Bemidji College with bachelors’ degrees in Business and Speech and Drama. Denny moved to Blue Earth, Minnesota, where he taught high school business classes. He then moved to Cedar Rapids, Iowa where he married Winnefred “Winnie” Lowe on August 12, 1967. Denny taught business at Kennedy High School during the inaugural 1967-1968 school year. He then attended Northwestern Lutheran Theological Seminary in St. Paul, Minnesota, from 1968 – 1972. While attending Seminary, he served as an intern and youth director at Messiah Lutheran Church in Minneapolis, Minnesota. Denny was ordained at First Lutheran Church in June 18, 1972. During his ministry, Denny served as pastor of the following Lutheran churches: Immanuel in Sioux City, Iowa, First Lutheran in Cedar Rapids, Iowa, Resurrection in San Antonio, Texas where he was also mission developer, Resurrection in Overland Park, Kansas, Diamond Lake in Minneapolis, Minnesota, Our Saviour’s in East Bethel, Minnesota, and Cambridge in Cambridge, Minnesota. He was also Interim Pastor at Paynesville in Paynesville, Minnesota, Zion in Litchfield, Minnesota, House of Prayer in Richfield, Minnesota, and most recently at Resurrection in Marion, Iowa. Denny also served as assistant to the Bishop of Central States Synod of the ELCA from 1988 – 1993. Whether from a pulpit or on a community theater stage, Denny never shied away from telling a great story. He also loved music and could almost always be caught whistling or humming a favorite tune, even through his final days. He had unending patience, which he honed through hours of fishing, wood working, improving his golf game, and raising four children. Or, perhaps that patience was aided through the occasional martini, dry with an olive, or by escaping into his Kindle with the latest Clive Cussler thriller. There was never a stranger that wasn’t an instant friend, which is how he came to have an enormous circle of friendships that have lasted through the decades. He had unending heart for pastoring, and some of his favorite moments were mentoring the next generation of pastors for whom he had such love. Most importantly, his love of family, his fur kids and his abiding, enduring, and everlasting love for Winnie is one of the biggest gifts he left behind. He is survived and lovingly remembered by his wife, Winnie Wright of Marion; four children, Alycia Sutor of Oak Park, Illinois, Travis Wright of Burnsville, Minnesota, Kathryn George of Coon Rapids, Minnesota, and Brandon (Christina) Wright of Reno, Nevada; six grandchildren, Megan and Ian Sutor of Oak Park, Maya Wright of Burnsville, and Jada, Parker and Marcus George of Coon Rapids; three brothers, Gary (Joan) Wright of Lake Elmo, Minnesota, Michael (Sara) Wright of Cedar Rapids, and Randy (Fatima) Wright of San Diego, California; a sister, Beth Ann (Doug) McBride of Washington, Iowa; and many nieces and nephews. Denny was preceded in death by his parents. In lieu of flowers, the family has respectfully requested any memorial contributions be made in Denny’s memory to First Lutheran Church in Cedar Rapids or any of the congregations he served. Denny’s family would like to express their sincere gratitude to the Hospice of Mercy Care Team for their dedication, compassion, and kindness.

The family of Dennis "Denny" Walter Wright created this Life Tributes page to make it easy to share your memories.

Send flowers to the Wright family.