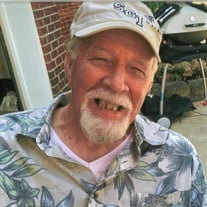 Dennis William Ingram, 77, of Marion, Iowa, passed away on Thursday, December 17, 2020, at his home in Marion. Per his wishes, cremation has taken place. Murdoch Funeral Home & Cremation Service of Marion is assisting the family. Dennis was born on July 17, 1943, in Cincinnati, Ohio, the son of Roscoe and Rosemary (Horn) Ingram. He graduated from Pius X High School and went on to attend Fullerton State University. Dennis served honorably in the United States Air Force during the Vietnam War, from 1962 to 1966. On February 9, 1971, Dennis was united in marriage to Victory “Viki” Ingram in Kirksville, Missouri. He worked as a broadcast tech for KCRG Television, retiring in 1995. Dennis was a member of the Optimist Club. He was a fan of all sports; he especially enjoyed watching the Dodgers. Dennis loved his family and their yearly trips to Florida. He will be greatly missed by all who knew and loved him. Dennis is survived and lovingly remembered by his wife of, Viki Ingram of Marion; two sons, Ryan Ingram of San Diego, California and Mark Caprye of Spokane, Washington; daughter, Stephanie (Bob) Bruce of Minneapolis, Minnesota; nine siblings, Judy Dunmyer of San Jose, California, Marilyn Smith of Carlton, Oregon, Greg Ingram of Marietta, Ohio, Pat Gross of Capitola, California, Diane Short of Bloomington, Indiana, Barb Compton of Grove City, Ohio, Beth Chirgwin of Portland, Oregon, Joyce Morrow of Troy, Ohio, and Joe Ingram of Canby, Oregon. He was preceded in death by his parents, Roscoe and Rosemary Ingram; and one brother, David Ingram. Memorials in Dennis’ memory may be directed to the American Cancer Society. May your future be bright and may our paths cross again. May the good Lord keep you in the palm of His hand.

Dennis William Ingram, 77, of Marion, Iowa, passed away on Thursday, December 17, 2020, at his home in Marion. Per his wishes, cremation has taken place. Murdoch Funeral Home & Cremation Service of Marion is assisting the family. Dennis was... View Obituary & Service Information

The family of Dennis William Ingram created this Life Tributes page to make it easy to share your memories.

Dennis William Ingram, 77, of Marion, Iowa, passed away on Thursday,...

Send flowers to the Ingram family.