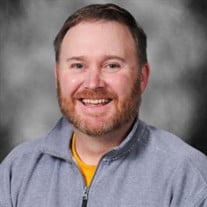 Derek Dean Anderson, age 43, of Cedar Rapids, Iowa, went home to be with the Lord Jesus in heaven on January 20, 2022. While we deeply mourn the unexpected loss of such a beloved grandson, son, brother, uncle, and friend; we also rejoice in the absolute assurance of a future blessed reunion, which is promised to all who, like Derek, have trusted in the sacrifice of Jesus for the forgiveness of sins and eternal life (John 3:16; 6:35-40; 14:1-6; Ephesians 2:8-9). A visitation will be held from 3 – 7 p.m. on Tuesday, January 25, 2022, at Murdoch-Linwood Funeral Home & Cremation Service in Cedar Rapids. A funeral service will take place at 2 p.m. on Wednesday, January 26, 2022, at Veritas Church, 509 3rd Street SE, Cedar Rapids, with a visitation one hour prior. Burial will follow at Linwood Cemetery in Cedar Rapids. Derek was born to Larry Dean and Charlotte Valdena “Dena” (Boone) Anderson on January 17, 1979, in Cedar Rapids, Iowa. Derek was a 1997 graduate of Bellefontaine High School in Bellefontaine, Ohio, where he excelled academically (National Honor Society) and athletically (1997 Male Athlete of the Year). Derek played collegiate baseball for Northern Kentucky University (NKU) where he achieved academic all-conference honors for three years. He graduated from NKU in 2001 with a degree in secondary education. Derek played baseball post-collegiately for the Springfield Giants (Ohio) who won the National Amateur Baseball Federation Major Division World Series in 2002. Derek’s career took him from Ohio to Virginia and finally back to Iowa where he taught and coached baseball for 15 years at Benton Community High School in Van Horne. Even though Derek never married, his life was full of love for the Lord and others. Derek attended Veritas Church in Cedar Rapids, Iowa. His house was full of bible study notes and he enjoyed studying with friends. Derek enjoyed Iowa Hawkeye sports, bowling, ice fishing, and a good cinnamon roll. Derek’s family and friends meant the world to him. His nieces and nephews never tired of using Derek as a jungle gym and he never tired of having them “hang” around. He devoted much time and love to his students and baseball players. Derek will truly be remembered for his kind spirit and care for others, which is evidenced by the incredible outpouring of love from people across the country. Survivors include his father, Larry Anderson of Cedar Rapids; mother, Valdena “Dena” Anderson of Cedar Rapids; paternal grandmother, Helen Anderson of Cedar Rapids; brothers, Jay (Kristie) Anderson of Monroe, Michigan, and Chris (Christina) Anderson of Blairstown, Iowa; nieces, Noel, Anna, and Selah; and nephews, Deacon, Graham, Duncan, and Oliver. He was preceded in death by his paternal grandfather, Paul Anderson; and maternal grandparents, Oscar and Jewel Boone. Memorials may be directed to the Benton Community High School Baseball Program, c/o Benton Community School District, Central Office, 304 1st Street, Van Horne, Iowa, 52346, in memory of Derek.

Derek Dean Anderson, age 43, of Cedar Rapids, Iowa, went home to be with the Lord Jesus in heaven on January 20, 2022. While we deeply mourn the unexpected loss of such a beloved grandson, son, brother, uncle, and friend; we also rejoice in... View Obituary & Service Information

The family of Derek Dean Anderson created this Life Tributes page to make it easy to share your memories.

Send flowers to the Anderson family.