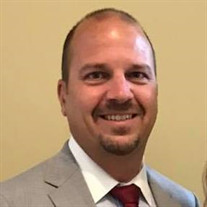 Dewitt Allen Jones, 50, of Center Point, Iowa, passed away on June 11, 2021, in Greer, South Carolina. A memorial service will take place at 5:30 p.m. on Thursday, July 1, 2021, at Alice United Methodist Church in Center Point, with a visitation one hour prior. Burial will take place at Center Point Cemetery. Murdoch Funeral Home & Cremation Service in Center Point is assisting the family. Dewitt was born on March 24, 1971, in Cedar Rapids, Iowa, the son of James “Jim” Leo and Loretta (O’Connor) Jones. In 1989, he graduated from Center Point High School. Dewitt then attended Kirkwood Community College where he studied mechanical engineering design. He went on to obtain his bachelor’s degree in industrial technology from the University of Northern Iowa in 1995; Dewitt has an executive business certificate from Massachusetts Institute of Technology (MIT). He also achieved his master’s (MBA) from Clemson University. Dewitt started at Sealed Air - Cryovac in 1992 as a student drafter; he worked there for 29 years, rising from a drafter in engineering to the Vice President of Global Quality. Dewitt visited over 40 different countries for work and vacations in his lifetime. He also had a patent and several pending for his work at Sealed Air – Cryovac. Dewitt was united in marriage to Jennifer “Jenny” Dudley in October of 1992 at Alice United Methodist Church. Dewitt loved anything extreme; fast cars, skydiving, bungee jumping, and white water rafting. He also found joy in hunting and collecting guns. Dewitt showed horses professionally in his younger years. He owned a laboratory with Jenny and their partners in Greenville, South Carolina, called Luxor Scientific. Survivors include his wife, Jennifer Dudley Jones of Greer, South Carolina; a son, Indiana Allen Jones of Greer; a daughter, Trinity Lynn Jones of Greer; parents, Jim and Loretta Jones of Center Point; one brother, Timothy (Rose Marie) Jones of Oregon, Illinois; and three nephews. He was preceded by one brother, Bradley Jones.

The family of Dewitt Allen Jones created this Life Tributes page to make it easy to share your memories.

Dewitt Allen Jones, 50, of Center Point, Iowa, passed away on...