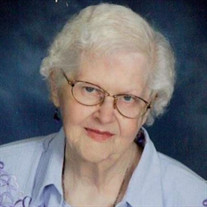 Dolores Ann Holecek, 90, of Marion, Iowa, passed away on Monday, September 27, 2021, at Living Center West in Cedar Rapids, Iowa. Family will greet friends and family from 5 to 7 p.m. on Thursday, September 30, 2021, at Faith Lutheran Church in Marion, Iowa. A funeral service will be held at 10:30 a.m. on Friday, October 1, 2021, at the church, officiated by Pastor John Albertson. Burial will follow at Oak Shade Cemetery in Marion. Murdoch Funeral Home & Cremation Service in Marion is assisting the family. Dolores was born on July 30, 1931, in Marshalltown, Iowa, the daughter of George and Permilia (Heckle) McCord. On November 11, 1950, Dolores was united in marriage to Robert F. Holecek. She was formerly employed as a manager with Hobby Hut at Lindale Mall and the former Westdale Mall. Dolores later worked part-time at Kohl’s for ten years. She was an active member of Faith Lutheran Church, where she taught Sunday School. Dolores enjoyed knitting and knitted prayer shawls for the church. She also enjoyed cooking, baking, and reading Bible stories. Dolores was a Scout Leader and a First Silver Fawn Award Winner. She will be greatly missed by all who knew and loved her. Dolores is survived and lovingly remembered by her two sons, Robert Holecek, and James Holecek, both of Marion; daughter-in-law, Robin Holecek of Cedar Rapids; two granddaughters, Christine (Kyle) Coberly of Loveland, Colorado, and Emily Holecek (Dominick Castle) of Atkins, Iowa; and four great-grandchildren, Alexus, Lincoln, Jackson, and Jefferson Coberly, all of Loveland. She was preceded in death by her parents, George and Permilia McCord; husband, Robert Holecek; and two daughters, Debbie Holecek and Ruth Ann Holecek-Mackey; and one son, John Holecek. Memorials in Dolores’ memory may be made to the family to be designated later.

The family of Dolores Ann Holecek created this Life Tributes page to make it easy to share your memories.

Dolores Ann Holecek, 90, of Marion, Iowa, passed away on Monday,...

Send flowers to the Holecek family.