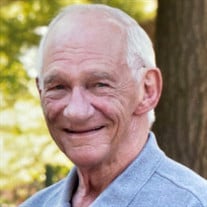 Donald Klinger, 85, of Marion, Iowa, passed away on Thursday, October 7, 2021, at Hiawatha Care Center in Hiawatha. A visitation will be held from 4 - 7 p.m. on Friday, October 15, 2021, at Murdoch Funeral Home and Cremation Service in Marion. Funeral services will be at 10 a.m. on Saturday, October 16, 2021, at the funeral home, with an additional visitation one hour prior to services. A livestream of the funeral service may be accessed on the funeral home website tribute page for Don Klinger, under “photos and videos,” starting at 10 a.m. on Saturday, October 16, 2021. Don was born on March 31, 1936, in Clinton, Iowa, the son of Leo and Helen (Arzberger) Klinger. He was a 1955 graduate of Franklin High School, he went on to attend the University of Iowa where his love for the Iowa Hawkeyes grew. On July 4, 1985, Don was united in marriage to Joan (Haster) Janda-Klinger in Cedar Rapids, Iowa. Don was the President and CEO of Klinger Paint Company until he retired in 2017. He helped the company successfully rebuild after being destroyed by fire in 1970. He was a member of Royal Order of the Jesters, El Kahir Shrine, and Crescent Masonic Lodge #25 A.F. and A.M. Don enjoyed his frequent trips to Canada, cooking on his barbeque grill, and was an avid golfer. He had a great love for his family, the outdoors, and the Iowa Hawkeyes. Don will be greatly missed by all who knew and loved him. He will be remembered for his generosity, witty one-liners, and devotion to his wife, Joan, and Yorkie, Sassy. Don is survived and lovingly remembered by his wife, Joan Janda-Klinger of Marion; children, Deb (Cleve) Klinger Corlett of Virginia, Greg Klinger of Virginia, Stacy (George) Janda-Nimmo of Minnesota, Michele (Craig) Wilson of Marion, Lisa (Dennis) McIntee of South Carolina, Tammy (Trampus) Wihlm of Des Moines; 18 grandchildren; two great-grandchildren on the way; and his loving puppy Sassy. He was preceded in death by his parents, Leo and Helen Klinger and brother, Bob Klinger. Don’s family would like to offer their heartfelt thanks to, Dr. Jason Booth of Mercy Care Vernon Village, Dr. Samuel Wood of Hall-Perrine Cancer Center, The Keystones of Cedar Rapids, and Hiawatha Care Center’s skilled nursing staff for their loving care of Don. Memorials in Don’s name may be made to: Animal Rescue League of Iowa, Inc, Attn: Donations, 5452 NE 22nd Street, Des Moines, IA 50313-2528.

Donald Klinger, 85, of Marion, Iowa, passed away on Thursday, October 7, 2021, at Hiawatha Care Center in Hiawatha. A visitation will be held from 4 - 7 p.m. on Friday, October 15, 2021, at Murdoch Funeral Home and Cremation Service in Marion.... View Obituary & Service Information

The family of Don Klinger created this Life Tributes page to make it easy to share your memories.

Donald Klinger, 85, of Marion, Iowa, passed away on Thursday,...

Send flowers to the Klinger family.