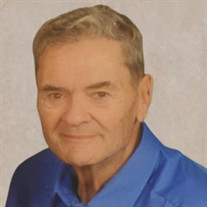 Donald Allen Eiben, 82, of Anamosa, Iowa, formerly of Central City, Iowa, died Monday, February 7, 2022. The family will greet friends from 9:30 – 11:00 a.m. on Thursday, February 10, 2022, at First United Methodist Church, 216 Commercial Street, Central City, Iowa. A memorial service will follow at 11:00 a.m. on Thursday at the church. Inurnment will take place at a later date at Mt. Clark Cemetery in Central City. Murdoch Funeral Home & Cremation Service in Marion, Iowa, is assisting the family. Don was born April 13, 1939, in the Gate House of the Matsell Mansion in rural Anamosa, the son of Mary and Louis Eiben. He graduated from Central City High School, Class of 1957. Don was united in marriage to Carol Michels on July 26, 1959, in Waubeek, Iowa. He worked at Rockwell Collins from 1958-68. For ten years, he had various jobs that included selling real estate, farm products, and owning and operating the Prairie Gas Station in Prairieburg, Iowa. He returned to Rockwell Collins in 1978 until his retirement in 2000. Don loved cars, whether it was buying, selling, or repairing them. He enjoyed his family first and foremost. Don was very generous and loving to his children, grandchildren, and great-grandchildren. Survivors include his wife, Carol of Anamosa; daughters, Patty (Dan) Griggs and Sue Eiben; grandsons, Adam (Beth), Ben (Chanda), and Chad (fiancé, Sam); great-grandchildren, Parker, Charlotte, and Andrew Griggs; one sister-in-law, Delores Grulkey; several nieces and nephews; special daughter and exchange student, Olimpia (Jamilo) Thome and their children; and special friends, Garry and Carol Slife, and JoAnn Russell. He was preceded in death by his parents, Mary and Louis Eiben; brothers, Robert and Paul Eiben; and a sister in infancy, Donna Eiben. A memorial fund has been established in Don’s memory.

The family of Donald Allen Eiben created this Life Tributes page to make it easy to share your memories.

Send flowers to the Eiben family.