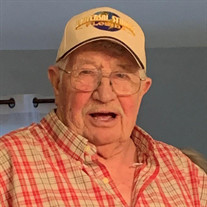 Donald “Don” Edward Pospisil, 80, of Bertram, Iowa, passed away on Monday, January 3, 2022, at Mercy Medical Center in Cedar Rapids, Iowa. The family will greet friends and family from 2 to 4 p.m. on Sunday, January 9, 2022, at Murdoch Funeral Home & Cremation Service in Marion, Iowa. A funeral service will be held at 10:30 a.m. on Monday, January 10, 2022, at the funeral home, with his nephew, Pastor Randy Pospisil officiating. Interment will follow at Campbell Cemetery in Bertram Township, Cedar Rapids, Iowa. Don was born on November 22, 1941, in Cedar Rapids, Iowa, the son of Edward and Albia (Dvorak) Pospisil. He began his career as a Signal Maintainer with the Chicago Northwestern Railroad, and retired 37 years later in 1997, with the Union Pacific Railroad. On April 19, 1974, Don was united in marriage to Bonnie Jean Eash, in Bertram, Iowa, where they made their home. Don handcrafted countless stocking hats and scarves and gave to many friends. He also enjoyed being outdoors, puttering around his acreage. But most of all, Don loved spending time with his family. He will be greatly missed by all who knew and loved him. Don is survived and lovingly remembered by his wife of 47 years, Bonnie Pospisil of Bertram; daughter, Julie Lichte of Las Vegas, Nevada; son, Jason (April Larson) Pospisil of Cedar Rapids; four grandchildren, Zachary, Joshua, Sarah, and Abigail Lichte of Las Vegas; brother, Albert (Beth) Pospisil of Cedar Rapids; three sisters, Pat Houdeshell, Nancy Nickerson, and Alice Werneburg all of Cedar Rapids; father-in-law, John Eash of Williamsburg, Iowa; and several nieces and nephews. He was preceded in death by his parents; sister, Madeline Pospisil; two brothers-in-law, Daniel Nickerson, and Dennis Werneburg; and mother-in-law, Betty Eash.

The family of Donald E. Pospisil created this Life Tributes page to make it easy to share your memories.

Send flowers to the Pospisil family.