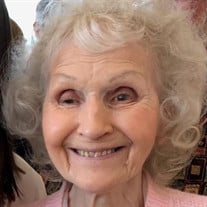 Donna Bahndorf, 91, of Manchester, Iowa, went to be with the Lord on September 13, 2021. Funeral Service: 10:30 a.m. Monday, September 20, 2021, at Murdoch-Linwood Funeral Home & Cremation Service, Cedar Rapids, Iowa with visitation to begin one hour prior. Burial: Linwood Cemetery, Cedar Rapids. Guests are respectfully requested to wear a mask and socially distance. Donna was born July 5, 1930, in Trenton, Missouri, the daughter of Donald and Helen (Moore) Kennedy. She graduated from Wilson High School in Cedar Rapids. Donna worked at Merchants National Bank in Cedar Rapids as secretary to the president in her early 20’s. Donna was a dance instructor at Arthur Murray Dance Studio and that is where she met fellow instructor, Norman Bahndorf. They were married on April 24, 1955. They owned and operated the Bahndorf Restaurant together located in the CSPS Hall. Donna and Norman enjoyed spending time at their cabin on Lake Delhi back in the 1950’s and eventually moved there in 1982. Norman passed away in 2005. Donna enjoyed her family, her home, and loved all animals. Survivors include her children, Diana Knoedel (Tom Plaht) of Solon and Jeff (Sue) Bahndorf of Manchester; grandchildren, Lindsey Knoedel of Iowa City and Caitlin (Ian) Matteson of Cedar Rapids; nieces, Julie Anderson and Beth Ehlinger; and her beloved kitty, Baby Bootie. She was preceded in death by her husband of 50 years, Norman; son-in-law, David Knoedel; sister, Lenora (Kenneth) Anderson; and niece, Pam Harvey.

The family of Donna Bahndorf created this Life Tributes page to make it easy to share your memories.

Send flowers to the Bahndorf family.