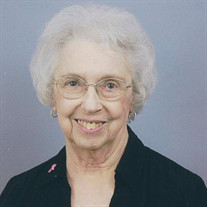 Doris Jean (Hiner) Koering, 85, of Cedar Rapids, Iowa, went to her eternal home on Sunday, February 13, 2022. Visitation will be from 4 - 7 p.m. on Sunday, February 20, 2022, at Murdoch-Linwood Funeral Home & Cremation Service in Cedar Rapids. A Celebration of Life, lead by her nephew Wade Hiner, will be held at 10 a.m. on Monday, February 21, 2022, at the funeral home, with a luncheon to follow at the Legacy Center at Murdoch-Linwood. A livestream of the service may be accessed on the funeral home website tribute page for Doris, under “photos and videos or media,” starting at 10 a.m. on Monday. Doris was born on September 12, 1936, in Brooklyn, lowa, to Jacob “Jake” and Darlene (Bolen) Hiner. She attended elementary school in Brooklyn until 1948 when the family moved to Springville, Iowa, where she graduated from high school in 1954. She married the love of her life and best friend, Larry D. Koering in her parent’s home in Springville on November 24, 1971; they were blessed to have 35 years together before God called him home on April 2, 2007. During her working years she was employed by a utility company, the federal government, and several TV stations before retiring in 1998 from Linn County government where she was employed for 28 years. She was involved in her church having been an Elder as well as serving on many committees and participating in various activities within the church. She enjoyed spending time with family and friends, eating out (surprise, surprise), attending gospel music concerts, and just relaxing with a good book. Left to honor her memory are Larry's children whom she loved and respected as if they were her own: Stephen (Laurie) Koering of Eden Prairie, Minnesota, Kimberly (Doug) Wilson of Mt. Auburn, Iowa, and David (Laura) Koering of Shellsburg; grandchildren, Jeremy Koering of Eden Prairie, Minnesota, Lisa (Chip) Ainsworth, Amy (Nate) Sickels, all of Marion, Iowa, Ashley (Dustin) Bissell, Jennifer Koering, and Ben Koering, all of Cedar Rapids; great-grandsons, Isaac, Caleb, and Noah Ainsworth, Warren and Westin Sickels, and Blaine and Sawyer Bissell. Also surviving are her siblings who provided much support and love: Jake (Beth) Hiner of Springville, and Jerry Hiner of Springville; special nieces and nephews include: Stacey (Bill) Matus of Central City, and their daughters Hope (Justin) Brown, of Central City, Sarah Matus, and Grace Matus of Central City, Wade (Lisa) Hiner and their daughters Lauren and Emily of Marion, Jason (Karin) Martin-Hiner and their children Gabriel and Mikayla of Decorah, Iowa, Melissa (Brian) Reynolds of Cedar Rapids, Theresa (Patrick) Needham and their sons Alex and Nick of Mukwonago, Wisconsin, James McNeill Ill of Cedar Rapids, and Kris Jacobs and daughter Kailee of Springville; also numerous cousins, with whom she enjoyed many September picnics and November fish fries. Those who have gone before her are her parents; her husband; special friend and companion, Larry “Ram” Ramsay; great-grandson, Tyler Ainsworth; siblings, Dee (Jim) McNeil and, and her sister-In-law, Verlee Hiner. Those wishing to contribute to a memorial may direct them to Christ Church Presbyterian Endowment Fund, 2000 1st Avenue NW, Cedar Rapids, Iowa 52404, or The Salvation Army, PO Box 8056, Cedar Rapids, Iowa, 52408-8056.

The family of Doris Jean (Hiner) Koering created this Life Tributes page to make it easy to share your memories.