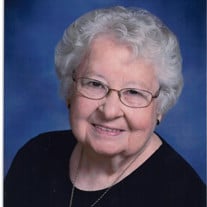 Dorothy Marie Dvorak Mullaley, 94, of Mt. Vernon, Iowa, passed away on Tuesday, June 7, 2022, at the Rehabilitation Center of Lisbon. Mass of Christian Burial will be held at 10:30 a.m. on Tuesday, June 14, 2022, at St. John the Baptist Catholic Church located at 212 7th Street SE in Mt. Vernon, where the family will greet friends and family from 9:00 a.m. until the Mass begins. The Reverend Andrew Awotwe-Mensah will officiate. Private family burial will follow at Mt. Calvary Cemetery in Cedar Rapids, Iowa. Murdoch Funeral Home & Cremation Service of Marion, Iowa, is assisting the family. Dorothy was born on February 5, 1928, in Lisbon, Iowa, the daughter of Roy and Grace (Novak) Light. She graduated from Lisbon High School and went on to attend Paris Beauty Academy in Cedar Rapids. On April 4, 1951, Dorothy was united in marriage to Hubert Dvorak. To this union, two daughters were born. Hubert preceded Dorothy in death on July 31, 1970. Later, on August 23, 1975, Dorothy married Bernard Mullaley and they made their home in Mt. Vernon. Sadly, he also preceded her in death in 2004. She was employed as a beautician for more than 40 years, until retiring as the Owner and Operator of her own salon, Hillside Beauty Shop in Mt. Vernon. Dorothy was a member of St. John the Baptist Catholic Church, the Altar and Rosary Society, and the American Legion Auxiliary. She enjoyed playing cards, especially Euchre, quilting, and gardening. Dorothy will be greatly missed by all who knew and loved her. Dorothy is survived and lovingly remembered by her two daughters, Mary Brendeland of Ankeny, Iowa, and Ann (Doug) Ash of Mt. Vernon, Iowa; three grandchildren, Christopher (Sariah) Brendeland, Meredith (Chadwick) Crawford, and Tom (Shelli) Ash; eight great-grandchildren, Cayden, Callie, Campbell, Leonie, Julia, Grady, Cora, and Lyndi; several nieces and nephews; and her beloved cat, “Lester”. She was preceded in death by her parents; first husband, Hubert Dvorak; second husband, Bernard Mullaley; son-in-law, Charles Brendeland; one brother and two sisters. Memorials may be directed to the family to be designated later.

Dorothy Marie Dvorak Mullaley, 94, of Mt. Vernon, Iowa, passed away on Tuesday, June 7, 2022, at the Rehabilitation Center of Lisbon. Mass of Christian Burial will be held at 10:30 a.m. on Tuesday, June 14, 2022, at St. John the Baptist Catholic... View Obituary & Service Information

The family of Dorothy Marie Dvorak Mullaley created this Life Tributes page to make it easy to share your memories.