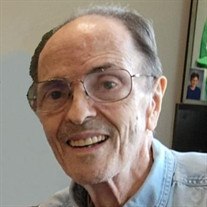 Rev. Dr. George Bryant McDill, 85, of Cedar Rapids, Iowa, went to be with his Lord & Savior Jesus Christ on June 2, 2022. A visitation will be held from 5:30-7:30 p.m. on Monday, June 6, 2022, at Murdoch-Linwood Funeral Home & Cremation Service in Cedar Rapids. The celebration of life will take place at 11:00 a.m. on Tuesday, June 7, 2022, at the funeral home, with a visitation one hour prior. Pastor Terry Van Wyk will officiate. A livestream of the celebration of life may be accessed on the funeral home website tribute page for George, under “photos and videos,” starting at 11 a.m. Tuesday, June 7, 2022. Burial will follow at Linwood Cemetery in Cedar Rapids. George was born in Columbus, Ohio, on May 9, 1937, along with his twin brother Robert, to James and Helen (Tyner) McDill. He married Anne (Donnelly) McDill on September 8, 1966, in Scotland and they moved to California on the second last voyage of the Queen Mary in 1966. They had three children: Don, Diane, and David. George and Anne later divorced, but Anne spent the last five weeks of George’s life by his side at The Gardens of Cedar Rapids. George graduated from Occidental College, Los Angeles, California, in 1959; and San Francisco Theological Seminary, San Anselmo, California in 1963 with his Master of Divinity. He was ordained by the Presbytery of Los Angeles on September 15, 1963. Following his graduation from the Seminary, George spent nearly two years in Glasgow, Scotland, as Assistant Pastor at the Croftfoot Parish Church. It was there that he met his first wife, Anne. Returning to the United States, George served over three years as Assistant Pastor to the San Marino Community Presbyterian Church, San Marino, California. After moving to Davenport, Iowa, George became Assistant Pastor on January 1, 1969, at Newcomb United Presbyterian Church, and was later installed as an Associate Pastor on February 8, 1970, where he served two years. George, Anne, and family then moved to Cedar Rapids in 1972 where George was the Pastor at Hus Memorial Presbyterian Church from 1972 to 1984. In 1977, George graduated from McCormick Theological Seminary, Chicago, Illinois, with a Doctor of Ministry. George moved to San Antonio, Texas, in 1984 where he was the pastor of Highland Park Presbyterian Church and Boltville Presbyterian Church. He married Vija Little on July 8, 1994. George retired on June 1, 2000. Survivors include his wife, Vija McDill of San Antonio, Texas; first wife, Anne McDill of Cedar Rapids; three children, Don (Chelsey) McDill of Cedar Rapids, Diane (Terry) Van Wyk of Cedar Rapids, and David (Sandi) McDill of Colorado Springs, Colorado; step-son, Egan (Amy) Little of San Antonio, Texas; seven grandchildren, Zach (Rachael) McDill, Ashley (Nate) Bunger, Max McDill, Karissa Lockhart, Hannah, Colin, and Faith McDill; four step-grandchildren, Amanda (Ryan) Davis and Marissa (Gabe) Ackerson, Elizabeth and Matthew Little; three great-grandsons, Easton, William, and Kaiden Bunger; four step-great-grandchildren, Kelly Davis and Ashlynn, Briar, and Aubree Ackerson; along with many nieces and nephews. George was preceded in death by his parents; his brother, James on July 16, 1993; and his twin brother, Robert on May 31, 2016. George’s children would like to thank The Gardens of Cedar Rapids for their loving care given to our father over the past nine months. In lieu of flowers, donations can be made to the Alzheimer’s Association or the American Heart association in memory of George.

The family of Rev. Dr. George Bryant McDill created this Life Tributes page to make it easy to share your memories.

Send flowers to the McDill family.