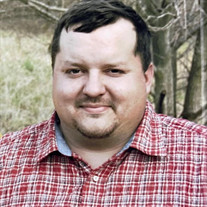 Dustin “Dusty” Robert Johnson, 45, of Columbus, Georgia, passed away unexpectedly at his home on Wednesday, September 1, 2021. Family will greet friends and family from 12 to 2 p.m. on Wednesday, September 8, 2021, at Murdoch Funeral Home & Cremation Service in Central City, Iowa. A funeral service will follow at 2 p.m. on Wednesday, at the funeral home. In true Dustin fashion, please dress casually for the service. Burial will be at Mt. Clark Cemetery in Central City. A luncheon will follow the burial at the Central City American Legion. Dustin was born on April 19, 1976, Cedar Rapids, Iowa. He was the son of Robert L. Johnson and Vera D. Klenk. Dustin graduated from Marion High School in 1994. He attended Kirkwood Community College and worked many jobs until he became ill with Multiple Sclerosis. “Dusty” enjoyed hanging out with friends and fishing. He was funny, quick-witted, and full of jokes. Dusty was a jack of all trades who knew everything about anything. He was a kind sincere friend to many. He could carry on a conversation with anyone. If you know anything about him, you know we could go on and on about the kind heart and “wise guy” personality. We miss you always and will continue to do so until we meet again. Dustin is survived and lovingly remembered by his mother, Vera Klenk of Springbrook, Iowa; his very special seven-year-old daughter, Lilee; four brothers, Darren (Brooke): Rusty (Hailye); Wes (Haley); and step brother Trevor (Amber); nieces and nephews, Leeah and Bailee, Fischer, Avery, Phoenix, and Jhett, Bennett and Clayton; maternal grandmother, Kathryn Klenk; step-mother, Linda Johnson; “Uncle Bob” Dietz; girlfriend, Mindy Richmond; lifetime friends, Charlie and Pam Brown; best friends, David Kerslake, Pat Legal, James Hancox, Bobby Perrin, Tommy Riddle, Jen Kinkead, Shelley Canaday, Joy Sueppel, and countless more; and several aunts, uncles, and cousins. He was preceded in death by his father, Robert L. Johnson in 2003; paternal grandparents, Grandpa George and Grandma Lela; maternal grandfather, Wesley Klenk; and uncle, Jim Klenk. Memorials in Dustin’s memory may be directed to the family c/o Darren Johnson at 38831 308th Street in Bellevue, Iowa, 52031.

The family of Dustin "Dusty" Robert Johnson created this Life Tributes page to make it easy to share your memories.

Send flowers to the Johnson family.