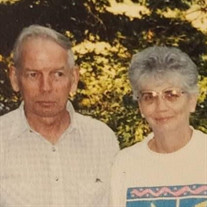 Norma June Fry, 86, of Cedar Rapids, Iowa died Wednesday, November 3, 2021, at Prairie Hills Assisted Living. Less than twenty-four hours later, on Thursday, November 4, 2021, she was joined in death by her husband of 67 years, Earl Lebert Fry, 88, also of Cedar Rapids. Visitation for Earl and Norma will be held from 9:00 until 11:00 a.m. Tuesday, November 9, 2021, at Murdoch-Linwood Funeral Home & Cremation Service, Cedar Rapids. A funeral service will follow at 11:00 a.m. at the funeral home. Earl and Norma will be laid to rest together at Linwood Cemetery, Cedar Rapids, immediately following the service. The family respectfully requests that guests wear their masks. Norma was born June 22, 1935, in Walker, Iowa to Harold W. and Winifred M. (Shaffer) Hemphill. She worked as a cashier for food services at both Harrison and Coolidge Elementary Schools until her retirement. Earl was born June 2, 1933, in Eureka, Kansas to Joseph I. and Ruth G. (Pitts) Fry. After graduating from high school, Earl served in the United States Air Force. He was stationed at Park Air Force Base in Victorville, California. Earl was a welder for Link-Belt-Speeder and later retired from Cedarapids Inc. Earl and Norma were united in marriage on June 20, 1954, at the Methodist Church in Walker, Iowa. They were both proud of their roots as children of farming families. Together they raised their three sons. As a family, they enjoyed many camping trips and annual reunions at Lake Iowa. Earl and Norma loved Fry glass and delighted in their extensive collection. Earl and Norma are survived by their son, Richard Fry of Marengo; daughter-in-law, Theresa Fry of Cedar Rapids; nine grandchildren; eighteen great-grandchildren; Norma’s sister, Merna Kramer of Minnesota; and Earl’s brother, Leland (Dixie) Fry of Cedar Rapids. Earl and Norma were preceded in death by each of their parents; sons, David Fry and Danny Fry; daughter-in-law, Sharon Fry; Norma’s siblings: Jim Hemphill and Marian Louise Stott; as well as Earl’s siblings: Milton Fry and Alberta Swearingen. Memorials may be made to the organization of the donor’s choice in Earl and Norma’s name.

The family of Earl and Norma Fry created this Life Tributes page to make it easy to share your memories.

Send flowers to the Fry family.